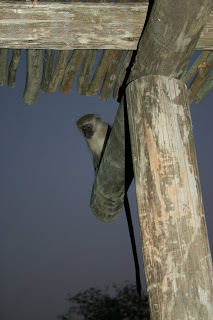 The dry season rolls on. Cloudless blue skies look down on a haze of dust that has completely obscured the Drakensburg Mountains from our view. Warthogs and monkeys continue to follow us beadily through the windows.

Last night I forgot to latch the front door before going to bed. It was closed but not latched. The front door is two enormous railway sleeper pages, held together with a kind of welded giant u-bolt that slips over the handles.

So this morning I met a monkey in the passage, who fled through the small gap in the front door. In the kitchen and dining room the tables and floor were covered in broken corn chips, like an orange snow storm had blown through. A packet of cookies left by last weeks visitors had been discovered; a half eaten cookie lay abandoned in the haste of retreat, between the kitchen and the front door, in a nest of crumbs;

The pile of washing up from last nights (late) dinner had supported a precariously balanced dish of strawberries and meringues; somehow every strawberry had been picked off this dish without upsetting the balance – impressive! This raid had been in whisper mode! And thank you monkeys for not leaving a fresh poo for me to step in – obviously they had had a relaxed time prior to discovery.

The less adventurous monkeys who had stayed outside, were looking extremely agitated and seemed to beg recognition for good behaviour.

A knock on effect from all the hungry and desparate animals; is the damage to the trees. Elephants eat trees. Its one of the things they do. Why are people always surprised, shocked , outraged when they see a tree that has been eaten by elephants? If there was plenty of lush green grass they would of course prefer this, but there isn’t and they need to eat. Meanwhile humans can scrape roads, move trees that are in their path, or block sun from the pool, or whatever, at whim. But when an elephant eats a tree there is a lot of tut tutting, and mutters about ‘too many elephants’ – I am on the ele’s side, in this, by the way .

However, I must say that when you see a tree that has been tusked, and the bark peeled off in great strips, it looks sore – like an open wound. And when the feeding process has totally ring barked a tree so that it is doomed to die – that is sad.

The predominant tree here is mopane – which has a leaf shaped like a butterfly. It gives us wonderful golden fall colours at the start of winter. It is hard wood, but not the most favourite, so tends to be left till last. Favourites are the lovely knob thorn acacias which have prominent knobs all the way up the trunk; and give off the most beautiful scent when in flower; marulas, which are soft wood but yield copious sweet fruits which the elephants love; comipheras (sp?)– which are spikey, unfriendly looking but extraordinary and beautiful too; Dalbergia or zebra wood which has HUGE SPIKES so must be awful to eat. In fact just about everything apart from mopane. All these sustain the browser species like giraffe and kudu, year round. Elephants can switch when the grass comes up.

Another culprit is the porcupine. He has been eating bark but from a lower level. He has munched into the bases of many trees, leaving raw open orange wounds. This year he seems to favour the Tamboti tree – which I always thought was semi poisonous? At least we cannot cook on it in the fire because even the smoke on our food will make us very sick. When carved though it is aromatic – a bit like sandalwood.

And of course we cannot end this blog post without mentioning our friends the monkeys. We had two guava bushes growing outside the kitchen door. The monkeys use these to perch on while watching us move food around the kitchen. Guava trees are a ‘problem’ tree in this country and it is forbidden to plant them. They grow easily from seed – as these two did. The monkeys have now bitten the bark off these trees all the way from ground up. So that’s the end of that.

So sorry trees – we know you are having a hard time too, but summer IS coming…..
Posted by Val at 9:50 AM

As a tree lover (we Germans are forest people, but we have oak woods, fir tree-covered mountains like in the Black Forest, and large beech woods, totally different - again - from your acacias and mopanes)I am always sad at seeing dying trees, but a dying elephant is worse. Trees will grow again, they always have. Thanks for your beautiful description, and hello to your mischievous monkeys!

I never appreciated mopane as firewood until I had a winter in Arusha with nothing but pathetic soft wood to burn.

Geli - I am a tree lover too, and some of those hardwoods are ancient. But maybe if people stopped being careless in their attitude to trees - there would be plenty for all.

hey Miranda - yes and that smell of mopane woodsmoke from a home fire is one of the best... close to first rain smells. eish, softwood fires, disappointing once you know the difference...

Sounds like everything is having a hard time. I'm praying for the rain to come as soon as possible to your corner of the world.

Oh how I love your descriptions of your world, not entirely unknown to me, but that seems like another lifetime now.

I shall go out now and tell the recuperating Tree to count blessings. Things could be worse.

Thanks for your visit, comment and honoured blogroll spot!

a wonderful post!i love your descriptions val.everything comes to life...

you have monkeys, we have racoons, they will do the same thing if given half a chance. once, i surprised/scared a juvenile racoon in my kitchen, he was standing at the pantry nibbling away.he gave a start and so did i not expecting to find a big hairy creature in my kitchen at midnite. i think the wind nudged the door open, or was it the full moon?

like the elles, i LOVE the marula tree, because the fruit can get turned into Amarula. I love this on ice. yum.

Thanks Reya - you do make a difference and for sure rain will come. wind is like an oven door opening today - maybe it will bring a change in the weather,

Rob - greetings to the recuperating tree! i love the inukshuks - feel i would like to build one of my own.

Lori Ann - i'd love to see a racoon. heard they can be pesky tho. but, like the monkeys, so cute looking you have to forgive :-)
hey Janelle - how cool you came via the black box this time :-) and the verification word secret message. listened to your CD again today, great stuff, more more

I need to send you some rain, Val. Here it just doesn't stop. We've had an unprecedented amount of rain, this year. But isn't this Africa and we're always at odds with the vagaries of the weather.
I'm on the side of the ellies too - even though I agree, those trees do look so sore when they've been debarked and tusked.
By the way, have you tried mopane worms...?
Would love to see some tree pics - had such a hard time trying to identify them in Kruger.

hi Absolute Vanilla - will get you some tree pics.. though we really need leaves and/or flowers/fruits for ID purposes. and then the same tree can look different in different areas.
yup its either drought or flood - everything by extremes. and i did eat a mopane worm once. not something i'd rush back to unless i am seriously hungry. you?

You have an incredible gift for telling a story. I find myself riveted for multiple reasons - your beautiful words, your pictures and your world which is so vastly different from mine.

It is different in most ways, but we do have one thing in common, and that is we are living in places that are not your "normal neighborhoods." Where Starbucks and Macy's are non-existent.

In other words, incredible places.

What a great blog--and great life-- you have.

Absolute Vanilla - where are you that you are getting somuch rain?? heat brought in some clouds today... sky watching

hi chesapeake bay woman! it is fascinating to read about your area too - am enjoying your blog! and those photos.... and the efforts involved in getting them :-) all so appreciated. I think i read an author who came from your area once ages ago, and since then the name has always nudged at my imagination. It does sound like a very beautiful natural area and the 'not normal neighbourhood' part is appealing too. :-)

You came to mine via the Black Box - and I've come to yours in reciprocation. Wow, Botswana? Monkeys in the passage? That's pretty exotic too.

Nice to meet you. JJx

Yep, also tried mopane worms once - also not something I'll rush to do again! :-)

I just love finding out about your world, it's so far from wet England.
It's like having a mini break every time I pop over.