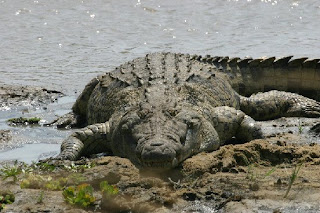 We are sitting on the stoep of my friends' lovely home, with the broad sweep of the Chobe River visible through a window in the evergreen forest.  It has been a stinking hot day, and the pool sparkles invitingly. Two bull terriers bark at a partially submerged pool brush – their water sport; one of them dives in to retrieve and emerges sleek as a seal pup.

We are all old friends. We have spent so much time together over the years in this part of the world. We start to reminisce – like real old people. Do you remember when….

Sounds of construction, traffic, heavy transport vehicles, rumble back from the main road. A river of sound and chaos passing by unseen in the heat zone. We are caught in an island of serenity between the Chobe and the river of sound.

Somehow the conversation turns to crocodiles.  Long ago we used to jump off the jetty and swim in the cool brown river. No-one would really think seriously of doing that today. The crocodile population has increased enormously, and they are not shy.

Some attribute this to escapees from the nearby crocodile farm. Apparently these penned crocodiles are in the habit of climbing out of their pens at night and into the river – returning home at dawn to lie around and wait for feeding time. I can't say whether this is true or an urban legend. What is real though is that there seem to be many more crocodiles, and they don't move away too easily from the boats.

Fishermen have been grabbed and pulled into the water. There are signs warning people to stay away from the banks. Ignore these at your peril.  In a campsite, a young German couple put their tent on the wrong side of the warning sign. That night a crocodile crawled out of the river and grabbed the girl through the tent. Luckily her screams awoke the other campers and a young guide leaped onto the back of the crocodile and managed to free the girl. She escaped with some bite marks and scars to tell the tale.

Another man, persuaded by his son to go 'skinny dipping' in the river after a few drinks – watched as a crocodile grabbed his son and swam away with him into the swirling depths.

That night the Defense Force and local residents of the town searched and searched the river and banks but found nothing.

At the rapids, a local man was fishing when a crocodile leaped up and grabbed his dog. Crocodiles love to eat dogs.  It wasn't such a big crocodile so the man managed to fight it off, but his hands and arms were badly mauled in the process. He crawled to the roadside to get help.  Someone stopped and he was rushed to the nearest emergency ward in Francis town – 5 hours away.  He was kept there for a few weeks for treatment and recovery. In the meantime his faithful dog sat by the roadside, where he had left his bloodied shirt, and refused to be moved. He waited and waited. Soon people started to bring him food.  He stayed right there until his master returned!

Each story told evokes another tale – some are legends and some are all too current. Children stolen by crocodiles; crocodiles hunted – wanted for murder - the evidence held in their stomachs.  Sometimes many crocodiles are shot before the guilty party is discovered. Sometimes the culprit is never found. 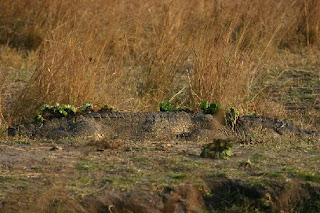 Despite the technology of town, building sites, traffic jams and road rage, the river continues steadily, and the crocodiles – unchanged for millennia – continue their reptilian ways. We grab another cold beer from the fridge and reminisce some more.

the jiz of giraffes 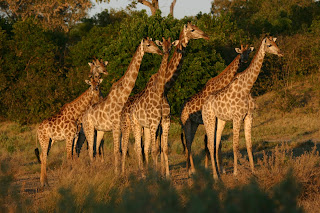 Inspired by a recent comment on my blog from Reya of After The Gold Puppy, I shall attempt to describe giraffes from a very non scientific but observational place.

Giraffes are cool. They may have invented cool. They stand around like fashion models, with long legs and long necks, gazing out of heavy lidded limpid eyes through a veil of dark lashes. They are aloof. Different. They don't speak or make a noise that we can hear. They communicate between themselves via ultrasound – a secret language only giraffes can share.

Giraffes are unintrusive. They are quintessentially African, able to co-exist in areas with human livestock by their ability to reach higher browsing levels. Their collective noun is a Journey of Giraffes. Although often seen in small groups the larger group is usually more widely scattered, so they seem to travel together over a broad space keeping an eye out for each other over the treetops. We usually find that there are no giraffes at all in sight, and then suddenly they are everywhere – peeping out from behind trees, anthills and cruising the floodplains. 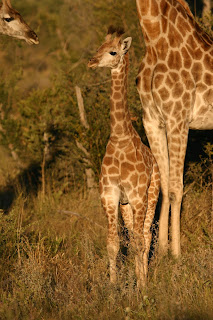 Giraffes can stare longer and harder than any other living thing. They can win any staring contest hands down. If they see something unusual or potentially harmful, they stare fixedly while deciding whether they need to flee. If we are looking for lions, we often try to follow the giraffes gaze, but sometimes they are just dozing, or ruminating.

They live on tiny little leaves of the acacia trees which they strip with the aid of their long blue tongues. Sometimes they chew on old bones for calcium. They have special valves in their neck so that when they stoop to drink at the waterhole, the blood keeps flowing to and from their brains – otherwise they would faint. 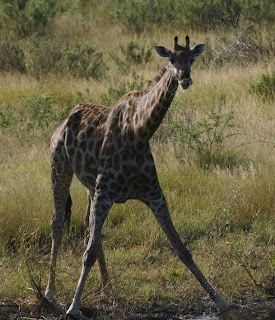 Because they are so quiet, aloof and elegant, we tend to assume they are non aggressive. However bull giraffes can get into angry fights when they swing their giant strong necks at the opponent – aiming a good size body blow. Their horns are bony extensions of their skulls covered with hide. On older bulls the bone can show through on the tips. An angry bull fight consists of graceful arcs and swoops, necks entwined, that can be to the death of the opponent.

Their main defence against predators is a powerful back kicking motion delivered while in flight.  They are strong enough to break a lions jaw, and send it flying. It is not uncommon to see giraffes with the scars of close encounters with lions, on their flanks. While on their feet they are pretty agile and strong, so a predator would need to knock them off balance in order to pull them down – or catch them in a tight corner.

They are very vulnerable when stooping to drink , and their stares pierce the surrounding bush for long minutes before they decide it is safe to do so.  In order to reach the water they have to spread their forelegs really wide, which also makes slippery mud a hazard. If their feet slip they can damage themselves so badly that they may not be able to get back onto them again. It is also a hazard of the mating procedure – so its not all plain sailing to be a giraffe. 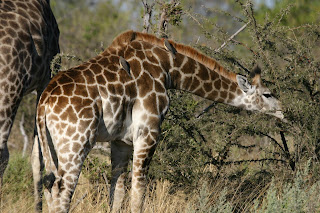 I love it when the giraffes move in around the studio. They usually stay for several days and venture ever closer. It does mean though, that they are short of browsing in the reserve so it's a sign of a difficult time for them.

Their jigsaw pattered hides are distinctive and evocative, and amazingly good camouflage. If they are standing still amongst the trees, it is possible to drive right up to and almost past them before seeing them. Standing still and staring seems to be their first resort. Perhaps they are the information gatherers of the spectrum- silently watching all others go about their business and daily dramas. Giraffes are calm.

"Take Giraffes - why are they so dinosaur like and why cant they speak? I know why they survive but its like they go out of their way to be bizarre - a long snake like tongue, two horns sticking out of their heads that they hardly use.  They  seem to be on a different time scale to us too.  The stare too long.  They take too long to drink. Their clocks are ticking at a different pace. They have big bones - yet they eat little leaves, make tiny droppings, ; whats going on up there? Its embarassing - all they do is stare and not speak.  "  KJ

They don't peck on your windows, poo in your kitchen, steal your food, chase your guests, bite, climb trees, or scream in your ear.

I woke up this morning to two giraffes staring through my window. Giraffes can stare in a way that would be rude in anyone else, but somehow not in their case. I sat up and they spun on their heels and moved back down the driveway, feeling safer staring from behind the bare branches of the leadwood tree.

After the weeks of swelter, we have had cool windy days. We are on the edge of the rain that is happening further inland and on the Natal coast. We have no rain yet, and may still not get any but at least it is blissfully cool and we can move around and think.

Yesterday I was promoted. I understand that in the mighty corporate world, it is a great sign of achievement and success when one is moved into an office with a window – and even more so if that window has a spectacular view – more than a wall of bricks!  Well yesterday I moved out of my tiny cluttered office with no window, into a big beautiful blue room with a view of giraffes walking by.  It used to be a guest room but now its mine!