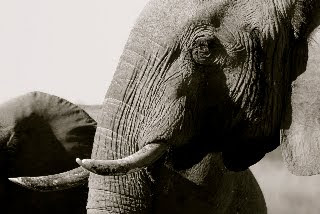 this picture was supposed to be on yesterdays post but, well, y'know -
just didnt work out.
Anyhow, yesterday, I was looking at this elephant wondering if those
were smile lines?
shortly after the picture was taken she turned and chased us down the
track so i guess not?
Posted by Val at 10:55 AM 23 comments:

We watched a ridiculous movie on dvd last night. I could hardly stay awake while people screamed and buildings tumbled and mass hysteria ruled the world. There was some nice music at the end though. By the time it finished and i had put the laptop away, i couldnt sleep. typical. So i pulled out my book and little clip on reading torch thing.  It was pitch black outside and the big yellow planet that hung low in the western sky earlier on had sunk below the treeline giving the other stars their chance to shine.
Then i heard it. The soft thud of something large mammalian and furry landing on the wooden deck outside our window.  I switched off the torch and listened hard thinking i could hear footfalls, and breathing - hoping it was the leopard whose tracks we sometimes see.  This morning there were flakes of bark lying on the deck - something had climbed into the big leadwood tree - the better to view the floodplain perhaps.  Sometime later he left.
This morning lying in my cosy bed sipping hot coffee I weighed the options of staying there until the day warmed up, or leaping out into the sharp cold air, and going onto the floodplains before sunrise to look for wild dogs. It was a quick decision - even though staying in bed had a strong case.  We watched the sky turn rosy pink, reflected in the mirror like water, then suddenly molten gold was spilling out between the trees, touching the yellow grasses and climbing up the gnarled tree trunks.  Daybreak.
Posted by Val at 1:58 PM 12 comments:

Last night a gentle wind made this wooden house creak like an old ship at sea. I considered dreaming that i was sailing away to a new and unknown land but then the elephants that were browsing around camp started making a racket. They were screaming and trumpeting, and chasing what? each other?  It was impossible to imagine anything else as their sounds ripped through the night.  I expect they are sleepy today.
This morning a thick mist cloaked the floodplains.  The air is icy desert cold, with no sunshine to warm our bones.  I have lit some candles inside the house to bring some cheer - we have no fireplace here.  I made some bread; it was nice hanging around the stove while the bread was cooking.
Midday approaches and everything is still, waiting - we know the burning sun is up there somewhere.   We havent heard the news for a week or so - perhaps another volcano has filled the air with smoke and dust?
And now its thursday and the fog has lifted leaving us with bright sunny cool winter days. There are wild bees  living in the roof, and in one of the old leadwood trees. The hebaclada bushes around camp are full of seed pods.  Their pods stand upright like candles on a christmas tree. The giraffe love to eat the pods and gather around the low bushes, their necks arcing inwards, blue tongues wrapping round velvet pods. One giraffe raises its head and catching sight of us, stares long and hard. Some of the other giraffe start moving away while this one is staring. He almost gets left behind.
We spent some time with a herd of zebra. One beautiful young foal had an ugly gash on its back leg, and walked stiffly next to its mother looking forlorn.  The rest of the herd busied themselves with biting and kicking each other for fun, while occasionally managing to graze.  Behind them two bull giraffes battled it out in their slow motion neck hurling way. It is soundless, but i couldnt help imagining a loud kaboom with each connecting shot.
This morning early , as pre-sunrise rasta colours streaked the eastern horizon,  we heard lions calling.  They have been away for a while - its time they came back.  Meanwhile beyond the blue dome of sky, giant celestial bodies are easing themselves into position for the forthcoming Cosmic Cross, and the owlets are out hunting in daylight.
Posted by Val at 9:14 AM 12 comments: