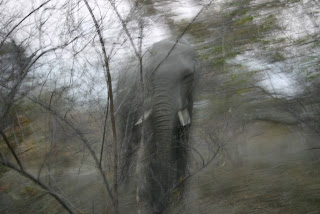 Lying in bed I feel  like my internal radiator is overheating. There is not a breath of wind and the hot air sits heavy on me like a large invisible elephant.  I get up and take a cold shower allowing the air to partially dry me before trying to sleep again. Mercifully before dawn there is a convection wind that sends dry leaves raining down on our tin roof. Breathe deeply - cool air - not cold but cooler.


We take an early morning drive out as the sun inches higher behind the tree line -  breathing cool dust laden air . The wind dries my eyeballs, reminding me of a Rolling Stones song from way back when. The song runs around my brain repeating half remembered words.  A hyena comes running in to the waterhole flicking his tail. He lies down quickly in the muddy water, drinking it in and lying in it at the same time.


Baboons arrive. The whole troop walks purposefully in. They are earlier today than usual. The hyena is lying down in the water blinking slow blinks - keeping an eye on the comings and goings from the water.  Baboons watch him warily and settle on the opposite side of the water, leaning forward to drink - rear ends in the air - tails hanging in a row.  Having drunk their fill they file off to the shade of a small hebaclada thorn bush resplendent with yellow pompom flowers. They rest in the shade - mothers feeding small babies, bigger babies hanging on the branches.


The hyena lies flat all day. We start to wonder if he is sick or injured in some way.


There has been an elephant in camp all day. He has been keeping a low profile whenever we walk or drive past.  He has been peacefully feeding- leaving large brown droppings along the pathways like giant bran muffins gently steaming. He is hardly visible amongst the greying leaves and tree trunks.  Sometime after midday we see him hurrying to the waterhole. The hyena is forced to move away from the waters edge. 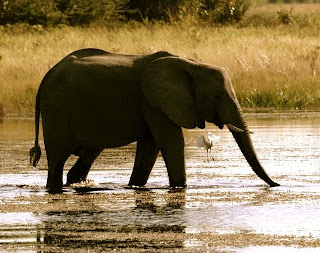 Clearly the elephant's  radiator is close to boiling as he spends a good half an hour sluicing water onto his parched feet, and throwing water over his back and ears, fanning his ears constantly. Finally he starts to relax and after a long drink he slowly walks off into the grasslands for a change of diet.


The sky is no longer blue, but a soft dust grey.


Evening, and the convection happens in reverse. A welcome breeze cools the sweat running on our bodies and faces.  The yellow grasses glow brighter in the late afternoon sun - outshining the sky.


The sun sinks - a giant dayglo beachball in the sky. It descends slowly through the layers of dust fading inch by inch. Francolins proclaim the end of day loudly calling from their vantage points. Daylight ebbs away and the sky belongs to the stars again. 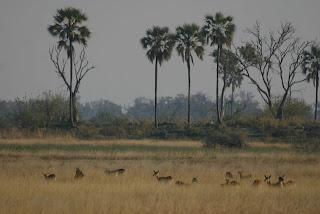 We drove to the airstrip yesterday afternoon. We left early and followed the edge of the water, breathing heady scents of new blossoms on the acacia trees and enjoying the active bird life on the flooded grasslands.  We were early at the airstrip so we parked in the shade on a small rise and stood on a fallen tree.
All around us were golden grasslands and tree islands of acacias, sausage trees and llala palms.  The horizon a tree line in shades of hazy blue.  The airstrip is a cleared strip of land in this sea of golden grass.  The first impression of people who arrive here by plane is the warmth of the sun, and the scent of wild sage.
Elephants move slowly between tree islands reminding me of distant sailing ships. Their ears the billowing sails. Their course set along well used paths.  Some more are wallowing in mud pools, sloshing and splashing the cool mud over their warm backs. Still more have crossed the water and are grazing on lush green grasses on the other side.  Further across a herd of buffalo have moved into a palm island. Their presence heralds lion activity, as the lions follow the buffalo herds and prey on them nightly.
We wait and listen for the small plane, turning and turning on our lookout log, taking in the view. Each time we turn something has changed, emerged, vanished. We know there are lions there somewhere but they are hidden from our view - probably lying flat in island shade, or deep in the yellow grass. 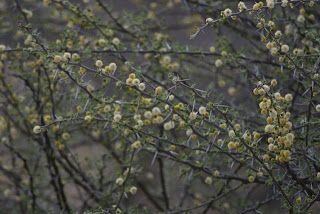 This is how the world made itself - meant itself to be - without all the rattle and clatter of cities and traffic.  Bird calls fill the air. The anthill we stand on is a living thing - a hive of industry. Everything in its niche fulfilling its role which we humans have vigorously tried to separated ourselves from.
We strain our ears for the sound of the plane. It comes into view, glinting in the late afternoon sun like an evening star.  It looks so small and vulnerable as it circles overhead turning to land.  A flying machine - always an awesome thought.
They land neatly, and taxi up the strip - the wind whisking their dust far and away.
People unfold and emerge chattering. The pilot opens the luggage pod and bags are pulled out and retrieved by several hands.  We are here to collect a parcel - a food order from town - for ourselves. We are handed the mail bag for Selinda and another parcel for camp.
Guests for the lodge are settled into their awaiting vehicle. We let them leave first to save them riding in our dust.  They take the floodplain road and we head straight home to watch the big red sun setting in the purple haze; and the amber moon take up its post in the eastern sky. 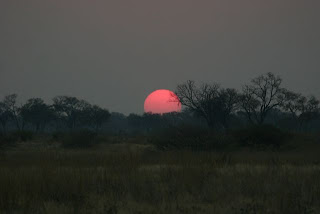 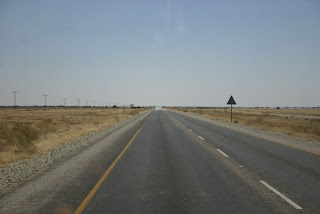 We came back to Selinda yesterday. It was a three day drive. I thought you might like some pictures taken through the windscreen as we went along.  Some of the blurs are beetle juice, and others are  chips from flying stones. 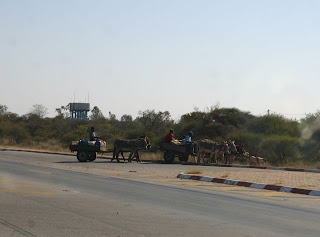 Part of the long road we travelled runs to the south and west of the great Makgadikgadi  Pans and east of the Central Kalahari Game Reserve. Round about a town called Rakops the scenery is flatter than a pancake. A bright white moonscape of open salt pans, spikey grasslands, and stunted acacia bushes. Dustdevils travel the open plains freely - coasting about on the horizon and sometimes boiling up in your immediate view and spinning across the mirage laden tar. 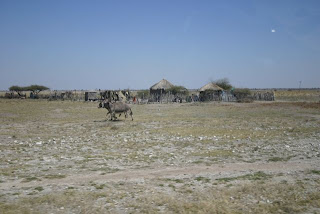 People live here. Traditional style villages of mud and thatch dwellings provide scant shelter from such an elemental zone. Donkeys, hobbled in two's and three's still taste the wind and try to run in their tragi-comic shuffle. 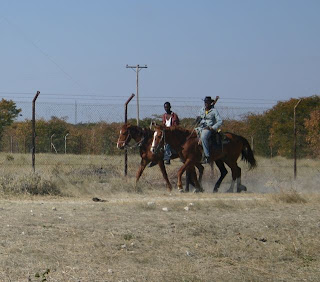 Cattle are rounded up on horseback - cowboy country. Road hazards are mainly livestock - cattle, donkeys, horses, goats. There are no fences and in such a giant landscape, they seem intent for some reason on snoozing on the tar. 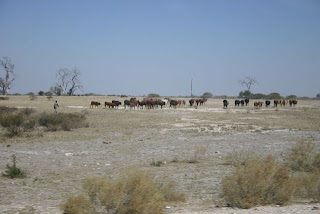 This road takes us to Maun - safari capital of Botswana and the jumping off point to the Okavango Delta. A sprawling dusty town built around supplying the tourism industry. We caught up with some pals, and bought supplies then set off through the Moremi Game Reserve heading west to get north. 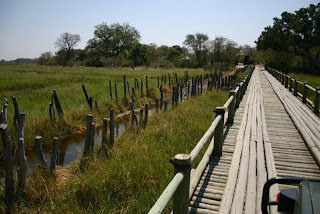 Things got interesting after we crossed the bridge at Kwai.  Contractors are building a new calcrete road, there are detours for construction, and detours for new floodwaters and pretty soon you only have the shadows on the sand  to tell you which direction you are heading in.  We found ourselves on a track going west, threading through mopane forests and flooded grasslands. Driving through water then sand for miles and miles. We needed to go north, but kept heading further west until sometime mid afternoon we came to a junction.  You could say we were lost, in that we didnt know for sure where we were. 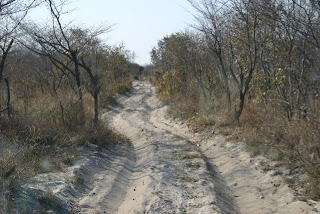 So we chose the track that went north, assuming it would eventually connect with a route we knew that would take us to camp. We were lucky the track stayed true north but it rolled and rolled through scrub mopane forest with hardly a break in the scenery for two hours. We tried to keep the courage of our convictions along the way, but couldnt help but wonder. Thoughts wandered to Dr Livingstone, and later Selous, trekking through this endless mopane at a much slower pace, desparate to find water.
The shadows grew longer. I had the sun on my left shoulder and K had the moon on his right. Just as we were beginning to despair we arrived at the crossroads on the TFC (tsetse fly control) road and over the way the last leg of the journey to Selinda.
Floodplains opened up around us and lions were calling as evening fell. Peace descended and all the rattle and clatter of travel and towns eased out of our shoulders. It felt so good. 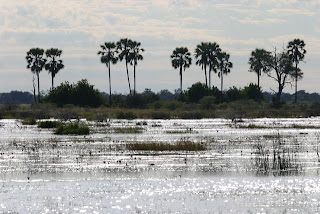 Oh and for those who were following my previous posts about the Selinda Spillway and water pushing in from the Okavango River after 30 years of dryness. Well the two channels met whilst we were gone. Apparently after constant checking and monitoring, the last few meters went so fast that everyone missed it! there was a celebration gathering to mark the occasion anyhow as new water is Big News in a desert country!
Posted by Val at 10:45 AM 16 comments: