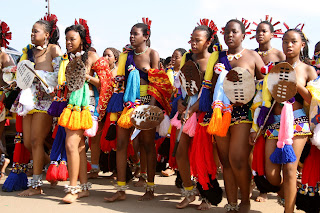 The Umhlanga (or Reed Dance) takes place in  late August or early September each year. It is a dance which attracts young maidens from every area of the Kingdom and provides the occasion for them to honour and pay homage to the Queen Mother (iNdlovukazi). Most of the participants are teenagers, although some of the girls are younger. Over 20 000 maidens gather reeds from selected areas which they present to the King and the Queen Mother.

The girls wear short beaded skirts with anklets, braclets and jewellery and colourful sashes. The royal princesses wear red feathers in their hair and lead the maidens to perform before Their Majesties. This ceremony can be photographed, provided you have a permit.

This year we finally made it to the Reed Dance in the heart of Swaziland's mountain kingdom.  Inspired and motivated by our friends from there, we duly donned the respectful gear mentioned above and joined the river of people flowing up towards the Royal Residence and Arena.  It was a beautiful crisp sunny early summer day.
Sunlight bounced in shards on the people and cars around us. Regiments of swazi maidens waited in groups on the grass, guarded by their indunas. Beyond them, the rugged hills of this mountain kingdom. 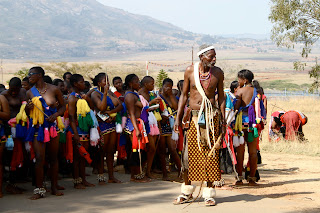 regiment of maidens waiting their turn

The Reed Dance is a traditional  ceremony performed annually by the young maidens of Swaziland for their King and the Queen Mother.  It goes on for eight days during which the girls collect reeds to present to the Queen mother.  This was the seventh day, when the girls dress in traditional costume, according to their regiment or the area they hail from, and dance infront of the King. Only unmarried and/or childless girls can perform in this event and there is a strong anti HIV slant that encourages young women to respect themselves.  Traditionally a Swazi festival, this year there were regiments of girls from other SADAC countries. Botswana, Zambia and Zimbabwe were also represented and  apparently  a record total of 80,000 girls registered this year. 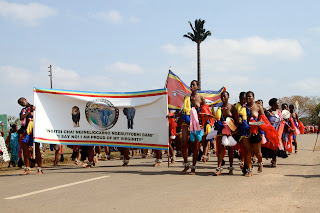 the parade heading to the arena

In the tide of visitors with us, many wore traditional dress. This is a big day for showing national pride and allegiance to the monarch.  Security is tight, and the kings Royal Guard, in their robes and skins, were threaded amongst the crowds clutching their cell phones and radios.  We found a place under a shade tree to watch the procession.  The girls formed a river of sound, colour and light pulsing past in a seemingly never ending flow. Visitors and Royal Guards stood on the roadside watching, admiring and enjoying the youthful energy. There was discipline to the flow and progress was monitored to allow each group enough time to file past.

The mood was respectful and friendly .  We were approached with offers to help us find the best place in the stands .Two young men in traditional gear  introduced themselves. They were members of the Royal Guard and had been tasked to make visitors feel welcome. We chatted for a while, and swapped email addresses. They insisted we each have our photos taken with them. 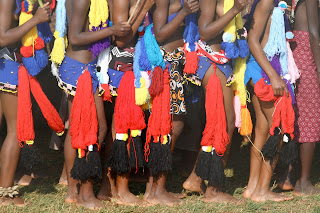 The arena filled up steadily with swathes of colour and song. The atmosphere continued to build in a vivid festival of young female energy.  Then the Royal Guard formed up and proceeded into the arena singing a different song and bringing a different energy to the event. 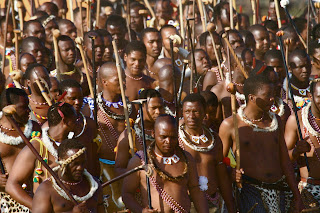 The young men were proud and warlike but not menacing.  The regiments of girls made way for them to pass through.  Then there were speeches. A red carpet  rolled out, but there was speculation whether or not the King would choose a new bride this year. He already has fourteen wives. 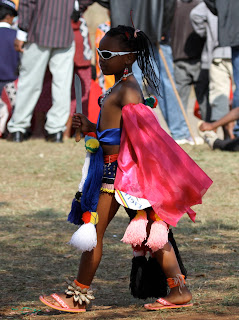 Finally, with our heads full of bright images and songs, we retreated while the river of people continued to arrive. We had expected tradition, but here we found cultural history celebrated in a modern context. The people we met were dignified and hospitable. As we left the country, the border officials thanked us for attending their Umhlanga.

How cool!! The energy of young girls is always cracking with life force.

I always say this, but wow, what an incredible life you are living!

Should have also said I love the wedding on the pans post. Wow!

What an amazing event to witness! You are so fortunate to see such ancient culture...and be allowed to take pics of it....I love that our western world has not diminished the culture.... What a day!

And there's us believing we have a monopoly on colour and joy, dignity and the celebration of history.

W O W!!
So awesome you could witness this and that you guys were treated as worthy guests

Reya - the energy, sunshine, sound,colour and light - was wonderful! a great celebration of female energy. so interesting when the Royal Guard entered the arena - such a difference!

Mermaid - yes it was spectacular and I loved that the tradition had a modern context and therefore a future.

Janet - you should go next year if you can?

Val I send Reiki every Wednesday morning, which will be your Wednesday night. I start at 9:30 my time. Don't know if it matters. I will be sending directly to you tomorrow. I really look forward to it!

what a stunning tradition - not only for the color and beauty of the pageantry, but because of the strong, female-empowering energy. i loved reading your account of this, val - thank you for sharing your words and images of something i would otherwise never have known about.

What a fantastic event. You make us really feel to be inside this event. I love it how you mention details. I guess we were all crowded under that shady tree with you, wondering if the King would choose a 15th wife!
Are you feeling Reya`s Reiki power? I bet it is very strong! Should be arriving right NOW!

what a great experiance and great memories val, thank you for sharing.

The Reed Dance is simply pleasure to watch and as well as a delight to perform. A year ago I went on a flight to Zimbabwe for a holiday trip and there I saw this dance being practised by dancers. It was a delight to watch there and I can assume what pleasure it will give when witnessed at the main event.


Zimbabwe is African country Which is Popular for Safari , Must Have Experience Once in a Life of this Event My Friends Booked Flights to Zimbabwe from london and had Joyful Experience of Life

Hithere,I am looking for a woman who can I marry.good behavior, good manners, good respect.with without kid's,a matured woman whatever she's working or not it's fine, she must between 20-30yrs old.Me 40yrs old man