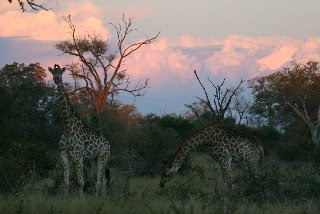 Evening found us at the pans behind camp. There are a series of pans
here, linked by wide elephant paths, and surrounded by trees that have
known seasons of heavy browsing. Some pans are covered with a fine
layer of bright green algea - these pans have duck families that
paddle around hoovering up the green - a job they can never hope to
complete. Some have chicks - slender tail mongooses lie in the shade
of surrounding bushes waiting to dart out and grab an unattended chick
or two. We watched this drama happen a few nights ago. Two Egyptian
Geese rushed in to save a chick from the jaws of the mongoose. The
chick was released but lay flopping helplessly on its back for about
half an hour. The parent tirelessly nudged and encouraged and stood
guard. The chick tried to stand but always toppled over onto its back.
Several times it looked like game over but steadily the struggles grew
stronger and we watched for long enough to see it rejoin the flock!
It was so engrossing I forgot to take any photos of the drama. Sorry
Mr Mongoose but we cheered when the chick survived.

So yesterday we drove slowly between the pans thinking we were alone,
save for an almost full moon that was rising fast in the evening sky.
Huge bulbous cumulus clouds turned rose pink in the evening light and
reflected sharply in the last pan, where a single blacksmith plover
stood watchfully. We turned for home.

Suddenly, as if everyone had decided to come out of hiding, we became
aware that we were surrounded by giraffe; beyond them was a vast herd
of elephants moving into the scene with some speed - swishing through
bushes and raising smells of pressed herbs from under their feet. The
giraffes made graceful arcs as the moon rose silver over their heads;
zebra trotted in; i could see impala looking bemused at the sudden
influx of visitors; a wildebeest or two kept their heads down; a bull
elephant shook an old acacia tree for seed pods. We were in the center
of a panoramic scene - the whole bathed in rich golden pink light. A
teenage elephant tests his power by charging a group of giraffe. They
take off in loping gate, startling the zebra who put in a sudden burst
of speed. The panic ripples through herds and finally settles.

The colour fades from the scene. The moon rises gaining silver
strength. The elephants move past all around us, munching steadily,
rumbling softely. Golden light leaves the grasses, climbs the trees
and releases itself into the evening air as the suns last rays dip
below the horizon. We head for home to watch the monochrome floodplain
and listen to lions calls reverberating through the night.

Such an evening. I'm enthralled by your stories. Thank you for sharing your life with us less fortunate to such experiences.

Enthralled is the right word, Cheryl. I can never figure out how to explain how much I LOVE this blog.

Great to see an image too. Thank you.

Now whenever I see an image of a giraffe I remember what you said that one should never get into a staring contest with a giraffe. Who knew?

What a fabulous evening you experienced. Thanks so very much for sharing, transporting us right there with your wonderful tales of life in the bush.

I agree with Rob. Your vivid descriptions transport me, as well, and I keep thinking You are in a vehicle, right?

I liked the moment when everyone had decided to come out of their hiding - what an image! Giraffe, elephant, wildebeest, zebra...and the moon. Incredible. If only I could join you on one night like this!

Your writing took us step by step through the drama and the raucus. I'm worried for your safety, enthralled at the animals beginning to arrive at your scene, and thrilled to be reading this in the safety of home.

Your life sounds so unreal to me -just amazing.

Your descriptions are mesmerizing.

I'm fascinated by your stories. I can smell Africa in them between each line. Thank you so much for sharing it allwith us.

As ever wonderful words describing what I consider an amazing expereince. Do you ever just get used to all these sights Val, it never reads that you do, but these wonderful creatures are such a backdrop to your daily life,can you be blaise about them?
xx

GIRAFFES and zebras, wildebeests and ellies, all around?!! and oh what else was there? a Full moon and mongoose and egyptian geese and did you say a plover too? oh dear,oh dear, yes I want to be there too...
xoxox

Oh Val! I can't say anything more than superb
x

eish yes it was an amazing evening performance! and you were all there with me in the car i know..
- yes Sandra - mainly in a vehicle....most of the time..
and Fire Byrd - no not blase yet - every day is so different and time here so precious. back to human dramas tomorrow...

thanks so much everyone
xxxV