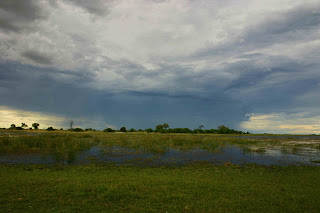 I have been battling with a summer cold since we arrived in Selinda. Can you believe it! I haven’t had a cold in years and now in celebration of the start of true summer I am walking around sneezing and croaking, and taking med lemon at night. Hah.
At first I thought it might be an allergy or hay fever, but it just carries on – not getting worse nor better. ho hum.

Yesterday was a day of storms. Great atmospheric benefactors cruised all around us distributing their heavy loads of purple rain to thirsty grasslands and animals. Pans are replenished, and fresh green leaves sprouting forth like a miasma of neon gasses softening the landscape.

Impala nurture their increasing nursery of young; tsessebe too have softly pliant youngsters in tow. Tsessebe are the fastest antelope of all despite their almost ungainly appearance and extraordinary colouring of burgundy red, with tawny flanks and purple overlays. Their youngsters are the colour of yellow grass – a perfect camouflage like lions – in the half light they are invisible. I wonder why the adults bothered to change colour at all except maybe to find each other after a long run.

This morning three wildebeest galloped past the house like forwardly mobile rocking horses. The first wildebeest had a tiny newborn calf running at its flank like a miniature shadow in brown.

The elephants are still looking a little on the thin side. Pelvic bones protruding and in some cases rib cages visible through toughened hides. With green grass starting to appear they are feasting again and soon will not have to travel so far between feeding grounds and water. Although eating tiny grass shoots is like feeding a hungry giant with a teaspoon.

Today started fresh and cool, but as the sun rose half way up the sky, humidity began a sudden climb. We are surrounded by purple storm clouds again behind the bright sunlight. Thunder grumbles and groans as if the clouds are complaining about the weight they have to carry now. Grey veils of falling rain trail behind them leaning left or right with the prevailing wind.

We have planted many of the new baby trees around the house. Most of them are baobabs and so will probably outlast both us and the house before they reach maturity. However, our plan to rehabituate the forest island, which has been depleted by hungry elephants, is at last in progress.

Planting new trees is a very satisfactory pastime. Especially when in semi urban areas such as Kasane, and the rural villages around it, there seems to be a campaign to bring down as many of the giant hardwoods and riverine forest as possible. A big shade tree acts as an environmental coolant equal to up to twenty air conditioning units at a time.

One would think in a continent of extreme heat and desertification, shade trees would be valued as much as rivers and waterways. However, on our way out of town this week we passed a place near Kavimba where a whole stand of massive umbrella thorn trees (acacia tortillas) have been ring barked presumably to make way for a small field.

While I am at it, I have another sad tale to share – blame it on the summer cold! The kasane rubbish dump has been an eyesore for years, with unmanaged dumping of waste plastics, tins bottles and all manner of soft and hard ware. It is now under extensive remodelling but the problems persist.

Situated on the main road leading to the entrance of Chobe National park it has become a source of attraction for wildlife species that live on the edge of the town. Marabou Storks, baboons, hyenas, honey badgers, vultures and even elephants can be seen there rooting amongst the plastic bags that drift around the periphery.
Recently elephant droppings have been found containing plastic bags, and last week three elephants died of gastro intestinal blockages due to plastic waste. Shame on us all!

Plastic bags are such useful items but they must be disposed of properly. I hate that dolphins and turtles mistake them for jelly fish in the sea and also die as a result of ingesting the indigestible material. Now we can add our magnificent elephant friends to the toll of human toxic waste. When will we ever learn that we cannot exist alone in a desert on this wonderful planet? 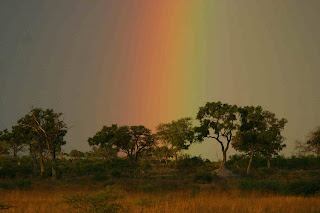 What a powerful post, Val - so glad that the rains are causing the grasses and buds to shoot, so glad that food is becoming available for the animals.
But, oh, oh, oh, plastic bags and the like - instant death for animals - as you say, would that we wake up and realise we are not alone and all our actions have consequences. It's strange how the idea of introducing a fee on plastic bags has done little to cease the flow of things - and it's appalling how bad we still are about recycling. As for having a dump so near a nature reserve, that just reeks of madness.
Hope the cold passes soon - if it's any consolation, the hayfever season down here has been the worst ever and even non sufferers have been suffering. Build your immune system up on zinc and vitamin C if you have any.
xxx
PS done your meme :-)

Cal-C-Vita! That's what my dear Mother always advocates. I remember only when I have a cold, but even then it does help. Take care and feel better soon.

Thanks for the look at your post rain world, just sad it's tempered with yet another sad story of man's wanton selfish destruction of our blessings.

thanks guys for your kind messages - i have some Vit C stuff which does seem to be helping.
Lori - we do a lot of that school clean up groups thing here but still.. probably because its not the kids doing it in the first place. its adult training we need :-)
Ab Van - i think the idea of charging for plastic bags has made a big difference here and SA, but still the problems exist. its shameful.
I wondered about hayfever - its not a normal thing for me though..
Rob - thanks for that - am feeling a bit better today already

Over here supermarkets now sell plastic bags, to get us to recycle our shopping bags. I have a lovely French one that I wander round clutching my greens in.
And even my son alwas cuts up the plastic rings that hold four cans of beer together as they are a hazzard to hedgehogs.
Every bit helps I guess.
Hope the cold gets better soon.

I was watching a program the other day about Elephants - majestic creatures that they are. I would be thrilled to see one in real life and to have wildebeast charge past my house would make me ecstatic!

Maybe some dormant virus got stirred up out of the sticky mud the other day ... I do hope your cold clears as soon as possible.

What a great post. I feel like I'm right there with you (as always). All those exotic animals! And I love your descriptions of the weather which is (as you know) of great interest to me. I think of weather as the emotional body of the earth.

I feel sad about the elephants, the dolphins and anything else that suffers because of all the plastic in the world. Our species, too, eats and drinks plastic all the time. We, too, suffer from it.

Opposable thumbs are a great evolutionary device, but sometimes the things we do with those thumbs, like make plastic bags, is no good for any of us.

hi val, hope you feel better soon! Hate that rubbish dump, and wish that they would hurry up and get it finished, with elephant-proof boundaries...(i hope) will try and get some more info on it to see what's really going on. Sadly, it has to be Somewhere, and anywhere in Kasane would really probably have the same problem.

Yes, we also noticed the beautiful ring-barked trees near Kavimba,and were horrified!!! Do you remember the lovely huge trees outside the old Northern Elecrical, which all got chopped down and there is now a concrete slab in their place as part of their warehouse/storage... despite people's best efforts to prevent them cutting them down.

I watch people in the shops here, and they never seem to think twice about buying their plastic bag, even for the smallest purchase. I look like a bag lady with all my re-usable bags. anyway, off my hobbyhorse for now! keep up with the healthy vitamins! lol xx

I haven't visited in a while and am so glad to hear you're finally getting rain. I'm sorry, however, about the cold. Blech.

I would never have guessed in a million years that elephants would ingest plastic bags but that gives me one more reason to hate them (the plastic bags, not the elephants). I get paper whenever I can, but not every place offers paper,i.e. Wal-Mart.

Val, hoping you're feeling much better already and ready for a meme. Yes, it's true, I tagged you. Do it only if you feel up to it. Take care of yourself.

Fascinating blog. I shall be popping back for my Africa fix regularly. x

Fire Byrd - I love that your son cuts up those plastic beer holder things to save hedgehogs! every little helps for sure.

CJ- elephants are amazing creatures - dont know how they put up with us!

hi Reya - wow maybe it was mudflu? plastic is useful though...

karen - yup i am also a bag lady of note! so sad about those trees! just have to keep planting...

CBJ nice to see you!

Rob, hey - am all better now thanks! and ready for the meme...