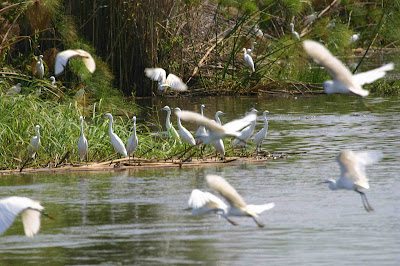 Barbel Run and other matters…

Wow – well I have just been able to connect to the internet and blogland for the first time in nearly two weeks and have feasted on all the wonderful blogs I have missed. Well not all as I am on borrowed internet time here so feel I have to be hasty. So I copied some to a file to read later.

After all the months of campaign rhetoric and politicking, the American elections kind of caught us by surprise. We had just arrived in camp that evening. We were listening to the news on the satellite radio as voting started and then the power went down as the generator was turned off for the night. For the first time ever I missed having a TV here. By morning it was all over. How quick was that?? Snippets on the radio, and shared info tell of a world in celebration. Its an exciting time – and our thoughts are raising a toast to our friends across the sea.

While world events twist and turn, smaller dramas occur along the dark waterways of one of Africa’s great river systems.

Barbel are huge whiskered catfish – dwellers in the murkey depths; like big smooth skinned eels with wide flat heads they have the ability to ‘walk’ on land to fresh water should their existing pools dry up.

We are in the Okavango Delta in Botswana working on the houseboat - the river sliding by, sparkling bright between tall reeds and acres of lush green papyrus. Water lily leaves form a mosaic around the boat between which occasionally small fish flash through sunlit patches. The sun bakes everything it can touch turning the wooden deck to a griddle pan.

Down river a flock of white birds fly up, circling, landing, flying up again. Steadily they draw closer and soon they are accompanied by a sound like water running over rapids. A fish eagle cries from the riverine forest and the watery gurgling sounds become a cacophony of smacking splashing noises. Barbel shapes break the surface all along the edge of the reeds, tails and heads – mouths agape. The barbel run is on.

This seasonal event draws fishermen from around the world, and fires the imagination of anyone interested in natural events. The Okavango delta is the worlds only inland delta as the river waters fan out into the Kalahari basin creating a jewel like maze of palm tree islands, floodplains and meandering waterways.

Once a year, as flood waters start to drop, the fish that have been breeding in the sanctuary of the dense papyrus and reed beds are forced back into the mainstream. This stimulates a feeding frenzy amongst the barbel who gather to feast on this new influx. In turn the birds feast on the periphery of the boiling pot – great white egrets, squacco herons, green backed herons, slaty egrets, purple herons, white herons, whiskered terns, pied kingfishers, cormorants, yellow billed kites - and crocodiles feast on the barbel. On the tailing edge of all this commotion are the tiger fish – our ultimate predator fish.

The bright white egrets move all along the activity zone competing for optimum positions; resting on huge green pompoms of papyrus – their white plumage dazzling against the green; suddenly all take off at once and we are surrounded by a flurry of white like giant snowflakes whirling around us – reflecting white shapes on the disturbed water.

For twenty four hours the air around us is filled with the sounds of smacking gurgling splashing water, the raucous cries of the flocks of herons and egrets, and the whisper of wind through the reeds. But the procession is ever moving, and finally the gurgling slows to an occasional splash, the frantic flocks wheel on further upstream, and the river resumes its steady dark progress.
Posted by Val at 11:51 AM

Val, do you know I get shivers all over from your desription!? It makes me feel (again!) like I`m there with you, watching open-mouthed the spectacle that`s going on around you, even listening and smelling, and feeling the heat under my feet and everywhere. You are a great painter with words! And doesn`t it give you a feeling how nature has its own ways...humans are not necessarily a part of it. We can only watch humbly and marvel at this beautiful (and sometimes cruel) universe. Fantastic post!

Who knew that this amazing spectacle took place. I've never heard of it before, but now I've "seen" it. Thanks for sharing.

Val, incredible. Wow. And to be able to witness it all. Someday I hope to get to see it too. It's one of my husbands favorite places on earth, the Okavango Delta.
You are truly an artist with words, I am with Angela and Absolute Vanilla(they say it better than I.
I love the photo too.
More...
xx

hey, your blog, it's green, I just noticed! I like it,good choice, green is the new black!
xx

word veri is the exact same shade of green...

Absolute Vanilla - thanks for your very kind words - am just glad you are enjoying and its great to share some of these incredible experiences that can be found here xx
Rob - yes it must be seen to be believed. I had heard about it but never imagined it would be so dramatic!
Lori - thats great - when are you coming to Botswana then??
ha you noticed! i went green in honour of the start of the green season ;-)