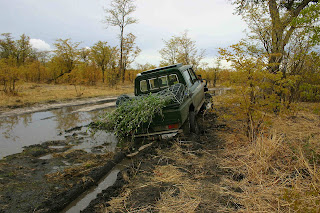 Whichever way you looked at it we were stuck. We were coming back from a trip to the nearest town, Kasane. And eight hour trip each way. We had stayed an extra day in kasane due to rain there – we felt we might be pushing our luck to set off in rain even if the chances of encountering some on the way were high.

We made it through the villages and down the park boundary without getting stuck either in sand or mud; the rain was kind to us and although we saw some fabulous storms all around, it held off and we were making reasonable time. After rain the thick sand ridges are easier to drive on, as they become harder. The mud however makes up for this by becoming a glutinous slimey mass of squidged up tracks and old elephant holes covered by water. These are known as ‘pans’ and we call the black sticky mud ‘cotton soil’ – I’m not sure why? – but it is rock hard in the dry season and lumpy to travel over; turning to buttery glue-clay during the rains.

We passed the half way mark, turning onto the transit road through the private concessions. 4km later and we stopped at a particularly tricky crossing, trying to find a bit of firm ground to drive across the pan. We were so nearly there, and then the car just slid sideways disappearing into the biggest hole – so deep the exhaust was under water.

We knew straight away that anything we tried would make it worse, but action is always better than nothing so we got busy. We jacked and dug, and put wood and grass under the wheels – using every technique we could think of, but we just slid further and further in. I took my shoes off to wade into the mud and started to dig out the back wheel.. It was encased in sludgy clay. The stuff was so incredibly sticky that I battled to get each load off the spade. I had visions of us being a fossil find of the future. If this clay dried out we would be a permanent fixture.

Lucky us though! Three hours later and one of the big supply trucks that brings stuff out to the safari lodges came around the corner. How lucky was that? It could have been days!

Anyhow with more digging, pushing, and tying a few ropey lengths together (in the absence of a proper tow rope); attaching the pulling power of a massive truck… and we were rewarded with the wonderful sight of the vehicle popping out of its hole – hurrah!

In the two days we had been away, the new mopane leaves were out. The afternoon sun backlit bright dayglo colours of greens, peachy oranges and pinks on every gnarled mopane scrub, stump or branch. Like fluttery flags celebrating rebirth and renewal after the baptism of first rain.

Into this colour fest, the impala have dropped their young. All legs, ears and inquisitive eyes, they skitter and prance through a world ablaze with luminous greens, and air screaming with the sounds of cicada beetles. Surely they think this is how it always is?
Posted by Val at 8:40 AM

'A book!' she cried. 'You must write a book!' Call it 'Blog Posts From Africa' or something. I hereby order the first copy.

This guy is a publisher: Start with him. (He recently made a comment about Belle de Jour - a blog that was turned into a book - not that I'm comparing your content with hers!)

thanks Katherine - its a nice idea!
i will check out his site.
X

good heavens, Val! had no idea that you two were going to have such fun and games, with the crazy load of trees on board too! so pleased to hear you escaped impending fossilisation and are still in the land of the living...
lol
x

Oh boy, that is so stuck. I think they call it cotton soil coz cotton grows so well in it. Lucky indeed.
Isn't it wonderful to have the rain? I'm loving it.
Thanks for your nice comment on my last post.

Oh Val, how funny! You and K and the trees as fossils, found under the remains of some steel (what was that??). Just kidding, glad you got helped out! Wonderful to have fellow men! OF COURSE you must write that book (Kath, it was MY idea, too; and I want at least the second copy!). Oh, the sweet impalas...I always loved them, so gracious creatures!

As ever I'm transported to where you are. Your writing is just so evocative. And I'm in there in the support club for you to write a book.

Do you have a big pair of boots? That mud sounds downright scary! So glad you weren't stuck for days inbetween here and there. Eight hour drive to the closest town??

Ok, I think I said something about a book awhile ago too...Val?...so,well,great post,not the mud,but your description of the adventure,like always, is totally enjoyable.I am glad the little impalas have a nice start to life since the end for many comes so brutaly(as a meal!)right?
xx

thank you all so much for the vote of confidence!! of course i am loving the encouragement but really there are so many more worthy writers out there... but you never know :-) hehe

Tam - dont tell that guy from Chibembe that cotton grows well in that black stuff.... otherwise - who knows what next!! :-)