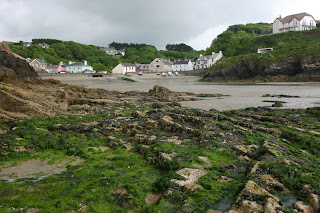 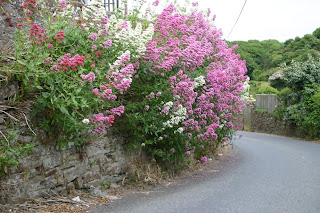 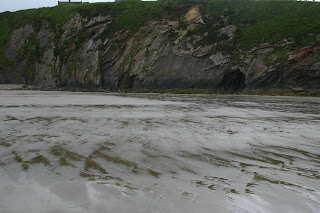 I went on a stroll down memory lane the other day. It is a place I spent most of my childhood free time from the beginning all the way through.  It was family time – free time – exploring rocks and caves and craggy cliffs; soaking up sunshine on springy coastal grasslands watching skylarks overhead and  azure waves crashing below; running on endless beaches, scrambling down cliff paths – and even if the sun didn't always shine it never stopped us. I can walk this place in my sleep and often do. Lately it had been calling me.

My father is buried in a churchyard high on the cliffs overlooking the bay. Sometimes the setting sun shines through the historic Norman chapel so that walking on the shiny beach is lit with more soul food.  Was it him calling me there; was it me calling me there? Was it just a whim?

As luck would have it, a window opened, and after a long flight, and five hour drive, suddenly there I was again. Nothing had changed really. Ghosts flitted about me, in a light storm of triggered memories. I watched the new families doing beach time and felt like a ghost myself. Watching, floating, breathing it all in.

None of the old people I remember are still there in the tiny fishing village. The pubs had been modernised and one had turned Australian. It was strange but vaguely cleansing.

Hedgerows higher than elephants, bedecked in wild flowers line the narrow roads – and local drivers have right of way – which makes driving a fun and exciting experience.

At low tide I walked the beach. The wind was a 'whetted knife'. The beach wet with streams, reflecting watercolours of people, buildings and jagged cliffs. Seismic rock patterns tower and tumble, beneath their ragged green fringes spotted with flowers.My feet were freezing in the icy pools and waves but it had to be done.

As we left to drive back to London, I stopped to buy potatoes at a farm stall. Apparently Pembrokeshire potatoes are special – something to do with the soil. There was no- one in sight, just a small wooden stall with a few bags of potatoes and a jam jar in which to deposit the money.  It was enormously good to know there is still one place in the world where old systems of trust prevail.

Lovely Val. Don't tell me that you were in the UK at the same time as my mother?? She was there for about ten days visiting granny in Cornwall, flew back today I think.

Lovely post. It must be quite a different living experience than where you are now.

i should have added that it felt really good to get back here :-)

beautiful val!!! and what a gorgeous place. actually one of my best friends here in tz comes from Pembrokeshire (sp?)...evocative writing...xxx j

Memory lane. What a place to stroll, in our minds, our dreams, our reality.

You and Pam both in England, and me not knowing, and you guys not calling?!! Next time make plans earlier, and take my number!! Or take the plane from Pembrokeshire to Usedom! Maybe on a bird`s wing, like Nils Holgersson... I`m glad you had a nice memory trip (your feet in that icy water, chuckle)and returned happily home!

As you know I lived not too far from there, so I know what a beautiful place it is. I also loved the "honesty stalls" that one finds all around the countryside. Glad you had a good trip down memory lane.

There really is no place like home! The feeling of returning and running down memory lane is incomparable. A real high! As Rob calls them,the "honesty stalls" make you feel as if trust still abounds. We have them here too in Ontario. I am always happy when I see them.

How wonderful to go back to your roots, it's such a bitter sweet expereince, tinged with sadness and joy.
And you came when the weather was lovely.
xx

Yes, had to be done. This was wonderful.

hi Janelle - it is a beautiful spot there - espec in the summertime! where in pembs does your pal come from?xx


Kristin - yes, memory lane is one piece of real estate that is truly yours ;-)

Geli - i didnt know pam was there same time, but will catch up with her now xx

Rob - i was so chuffed with that 'honesty stall' - a small thing but a big thing too !

Lorac - yes its strangely surreal to return to memory lane in reality instead of just in your head! So glad you have honesty stalls there too :-)

fire byrd - the weather turned as we got there - but no matter it was still glorious and yes, bittersweet to be there again x

thanks for your lovely comments all
xxxxxv

It's so important to put your feet down on landscapes that were formative sometimes, occasionally, whenever you need to.

Love the potato stall, too. Talk about helping you embody the earth of your childhood. What a wonderful story and journey, Val! Thanks for this.

I love the honesty bottle - gives me some hope for humanity. I see what you mean about the size of the hedgerows!!!

Good for you, Val! Thanks for retelling your story in such a special way. Love the idea of the honesty stall. Just wondering how that would work in Botswana(!) Beautiful photos, and memories x

surf is the best sport in the world :D try it and tell me something after that :p thanks for the coment.. come back when you want

It sounds like a beautiful place. The potato stall exists in a different form up the coast of Namibia past Heintes Bay before the seal colony where there are tables set along the road, at the edge of the Namib. On the table are beautiful pink salt crystals and a jar- not a person in sight. Trust is a lovely thing.

Janet - the honesty stall - i had forgotten about those. how good it was to be reminded :-)

Karen - you never know hey? maybe we should try one....

Marco - thanks! i am quite far from the sea though - especially the surfing sea....will let you know though. it really does look like fun.

Lauri - thats good to know - namib hey? pink salt chrystals in honesty stalls... I suppose it could be a long hot wait sitting there but still - thank you.

What wonderful writing, what a glorious trip down memory lane.
I remember in Guernsey we had the same honour system for "hedge veg" - heartwarming to know that despite the madness we live with here and that exists in big cities everywhere, good old fashioned values still survive.
Now just don't tell me you were there when we were there...

Thanks AbVan. No we were well after you. There was a heatwave inbetween, and that stopped as we got there :-)

Your writing just took me to England. What a beautiful post, all your words and the images that came to my mind. I know just what you mean about going back and feeling things are as they should be.
I hope you had a good trip all the way round.
oh, and we have the tables all around here too. theres even an outdoor bookseller, with a fence around and a gate. on the outside are shelves filled with books. after hours when the gate is locked you can still choose a book and toss your money through the gate!
love, lori

hi Lori - thanks for our comment - I hope this means you are feeling stronger again?
Love the sound of that bookshop - you must live in a calm place xx

Oh Val! You are an absolute honey - thank you very much for including me amongst all those fantastasic bloggers. Really made my day! I shall wear the award with pride on my blog!

How beautifully you write...how evocatively. I could feel the the 'whetted knife' of the wind and smell the sea-scent it carried. I love, love your words 'Ghosts flitted about me, in a light storm of triggered memories' - how beautifully apt that phrase is in the context of your reminiscence of your darling Papa.

(PS. Aaagh - I noticed the typo on the Reach Out Award. Idiot me! I've corrected it now and if it's bugging you, I have the new one up on my blog if you want to swap...)

Tessa - you are so kind - thank you. I had to look hard to see the typo and thanks but i wouldnt change mine for the world!