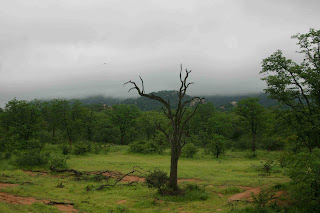 well blow me down! after my brave wintery words of yesterdays post it rained in the night - in what is becoming typical untypical behaviour from the rain gods. Today is a day of soft mists and gentle rain. The sound of droplets falling on the roof. Trees are dripping and grasses shimmering with diamante droplets again. Its a good thing. We need it. Winter rain.

The guinea fowl chicks had their first taste of freedom yesterday. We let them out in the morning and they were so excited. They immediately started chasing butterflies and grasshoppers. In a noisy cacophony of cheeps and peeps, the whole group were led by their vigilant parent birds into the koppies behind the house, where they could be heard noisily enjoying a natural foraging diet. 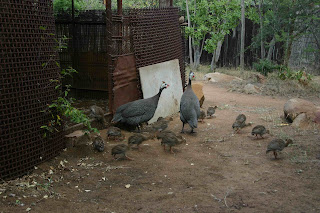 Sadly we lost one over easter weekend in a very unEaster like event.  We tried nursing and feeding and tending, but he was so weak he never really rallied.  RIP little chap. Now we have fifteen hale and hearty ones, but the urge to count heads never leaves. Yesterday there was a band of dwarf mongooses in the garden too.

Just before sunset the chicks emerged from the long yellow grasses, chirping all the way, and dutifully went back into the hock for the night. What a relief.

hi val, i always loved this time of year in maun: mornings getting chilly out on the boro river, cool sand, and the increasingly bare mopane trees. can still smell the winter smells too, funny how they stay with you. we had a flock of guinea fowl in our garden yesterday, mum and babies. and then a kestrel sitting atop a large tree keeping close eye - was rather alarming, but they seemed all to have survived.

hi Eliza - yes i love this time of year too, and the smells :-) where are you now I wonder? these low cloud days are perfect raptor hunting weather but our parent birds are very vigilant i see. they are the last survivors of the original flock so i guess they know what to do.....

Oh, this is my favourite time of year... strange to see the misty raininess! sorry to hear about the little lost chick..

writing from our farm on kilimanjaro, about 5kms down from the park boundary. beautiful up here, long rains have just started...been pouring all night, heavy soaking rain, really good for the coffee. don't find getting about so easy though, the slippery mud makes the tracks down a bit hazardous. i got rather good at wet weather driving in maun, sand i found was easier to get through despite all the rain! sending lots of positive thoughts for your little birds.

hey val...aaaaahhhh sweeeeeeeeeeeet lil thangs...clever too to come back to the safety of the hock...gorgeous that you have lion and mongoose lurking too! enjoy your last pre winter rain...loving ours here AT LAST...everything SOOO green...emerald...divine...xxx
j

Eliza oh yes duh! sorry - bit slow :-) must be gorgeous there. yes sand is your friend in rain much more than that slippery mud espec if you are on a slope! going out might be fun, but coming home could be a real challenge :-)

Hi Janelle - so glad you are in rain at last, and the world has gone green. this winter rain was a real suprise today - but lovely and cool and soaking. Chicks had a great time yesterday out on a Really Big Adventure - was so chuffed to see them come home tho!! phew phew

Beautiful, Val! Now you can write about guinea fowl, too, and share motherly talk with Vanilla!
Why does nobody comment on the tiny scripture? Is it just me that can hardly read it? My old eyes?

hi Geli - dont worry AbVan was the first i went to for advice on the ailing chick! she is the expert now.
I did think the type came out smaller on this one - have no clue why though...? will try to fix it....xx

Seems I've missed this new craze for having Guinea Fowl!!!

Sorry about losing the little sick guinea, but nice that the parents know to bring the rest to safety in the hock each night.

Nice too that you're having some late rains, even if it is out of the ordinary.

wow these birds are beautiful - it has been raining over here as well - April showers, bring May flowers :)

reading this and the previous post just makes me tingle. You write so beautifully.You have such amazing creatures around you, some by invitation and others not! The idea of a snake is not a good one to me.
xx

I can almost feel the rain and I'm sure it's not just the cool, rainy day in the DC. You have a way with words.