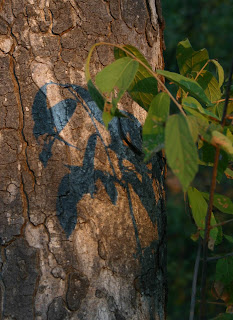 So its official then. March 21st officially marks the start of Winter. A man in a suit announced on the news and right on cue, there is a cool nip in the air. The baobab trees around the house are starting to lose their leaves; grasses are dropping their seeds and turning yellow; dams and waterholes are drying up.  Wide blue skies are swept clean of clouds and defy rationale with their depth of colour. Picture postcard blue.
It seems strange to me that in these days of climate change, drought and flood, and weather behaving as it wants - not as history dictates - that winter should know to start on March 21st. Perhaps Winter is still of the old school and knows when to come and go - not like these young wipper-snapper rainy seasons that stay out all night and sleep all day - missing their appointments and thumbing their noses at calendar schedules.
Lions have moved closer to the house. They seem to be following the wildebeest. There is a pride of fifteen, including three small cubs, one older cub, all the way through to a magnificent dark maned male lion. Their ability to disappear in the tawny grasses never ceases to amaze. Black tips of tails, black ears, eyes, mouths - the only clues to the presence of someone you do not want to step on while walking. 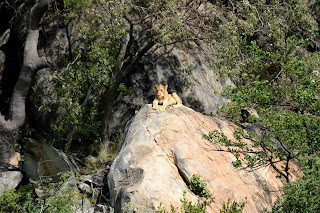 Scorpio is rising in the night sky too. It is such a fabulous constellation and dominates the night skies of winter. It makes me think of wonderful places where I have looked at Scorpio emblazoned in the night sky.
Yesterday there was a spitting cobra in the laundry store room. The room is a chaos of boxes bags stretched canvases - it needs a spring clean. I was working in the office next door and heard munching sounds like a big rat chewing on something. I tiptoed in to try and trace the noise just in time to see the tip of a brown tail disappearing from view. We left him there to do his job hunting rats, making sure to close off his access to the house.
I love the change of seasons, its like the change from day to night - a changing of the guard as different species come to the fore. Time to move, travel and explore. Winter - when the sun is golden warm and the shadows are cold and blue. A time to cluster around the open fire and share tall tales with pals of old. A time when the thick blanket of torpid heat is lifted, and the air blows fresh and clean. Safari season.
Posted by Val at 8:33 AM

Spring has sprung... I am out doing my job again for another season and I am seeing white tail deer all over the place. Amazing we live in such different worlds yet we are on the same planet.

hi Neo - yeah it always blows my mind to think that! love it though too :-)

Oh this is beautiful! I'm so glad your internet connection is working again.

I, too, love the turn of the seasons. I find it very orienting, grounding. The whole time I lived in San Francisco I was so disoriented. The seasons change there but it was too subtle for me.

I'm doing a series of constellation paintings. Now you've inspired me to paint Scorpio. I have no idea what it looks like but I'm going to find out.

I love your post. You are beginning the season we are ending. Reminds me not to live in my own little world.

Wow, a pride right there, so close to home! Exciting, if not a little scary at the same time.

how lovely Reya - more paintings! can I see them? Scorpio is a wonderful constellation - that and Orion are my favourites. They are opposite so you tend to see either one or the other. Orion in Summer here and Scorpio in winter. At the moment we see Orion in the early evening, and Scorpio rising later.
Happy Spring to you :-)

Robbins Mama - hello and thanks for visiting. I love to hear of spring happening elsewhere too

Rob - yes having the lions around does add drama to the scene!

And there I thought 31 March made it officially autumn...

I don't envy you the cobra - I think I'd take the porcupine any day instead! Not that sure about the lion either - but what a visitor to have!

Nice to see you're back on-blog, if that's what you call it.

I love to read your wonderfully detailed descriptions of such a different world.
Thanks

What a strange juxtaposition to the tulips outside my front door. I'll have a harsh return to Winter in a few weeks when I visit South America. The temps might the same as North America but minds are thinking of winter.

(I wrote today with you and Karen in mind.)

your observations are wonderful.
the most fab thing about winter is that it is followed by spring.
the more harsh winter, the more delightful spring.
Hope veld doesn't get too severe this winter

hi Nicky - I think its marked by the equinox on 21st - so thats probably how Weather knows what to do too?

Siobhan - thanks - I also love reading around the world. blogging is so cool :-)

Kristin - wooo South America - I hope you will be blogging from there? off to check your new post now :-)

Janet - yup we could be heading for another drought winter - unless we get winter rains this time... I just love the whole cycle but the change of seasons is always so exciting.

We are also right in the middle of spring time, with the garden gnomes everywhere returning from hibernation, and the daffodils and tulips and skylarks and soon the swallows returning from Africa. The storks are already here. A wonderful world, here and there! Thanks for your beutiful descriptions! But I would NOT want a spitting cobra in my house!! Chewing on rats, uargh!