Pink Dogwood from Wandering Mind gave me this meme a while back. Before you all gasp in amazement that i have finally figured out how to load photos from my mac, i have reverted to my old faithful for this one....until such time as i get my first mac badge.
So the meme is to go to my sixth photo file and choose the sixth photo and tell you guys about it. Well i went there and unfortunately that pic of the baby warts has already been exposed in an earlier posting. hmm what to do. so here is a selection of six photos instead... 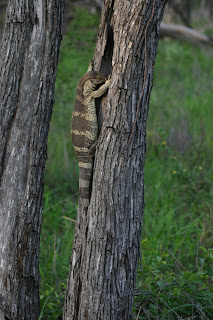 this leguaan (monitor lizard) spent a long time pretending to be part of the mopane tree while listening intently to some small movement deep in the hole in the bark - he was also watching us quite intently. When we moved, he upended himself into the tiny hole and squeezed his whole body upside down into the trunk of the tree until even the tip of his tail was out of sight. How on earth he ever got out again we shall never know. Perhaps he is still in there. 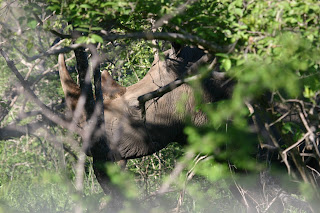 Here is a white rhino peeping through the bushes. I just like this one because for such huge, tank like, fiercesome creatures - you would not expect them to by shy and fearful 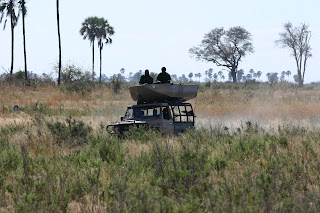 now here is a strange thing - a land cruiser driving through remote northern Botswana - which is a semi desert country - with a boat on its roof carrying two passengers. I invite you to add your own captions, or scenarios. 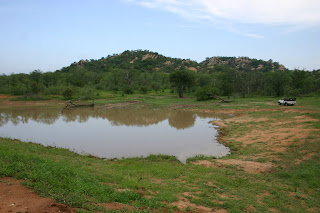 this is what we do after it rains - race out to see how much water has run into the dams. The idea is to collect as much water as possible in these dams, so that it sustains the wildlife through the oncoming dry season. 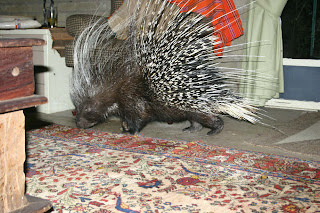 porcupine on the trail of the banana biscuit stash 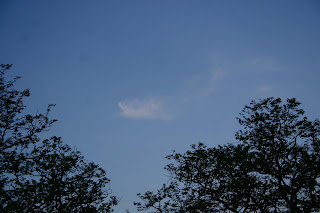 have you ever been tempted to wave back to a cloud?

Oh goodie, you've got piccies!!! Gorgeous shots - that one with the boat on top of the Landie reminded me of a small truck I once saw trundling up Botha's Hill - with a full minibus on the back...

ab van - thanks for my award too!!
dont think the cloud wave really works on here - it looked exactly like a person flying through the sky waving...

Great pics all six. Had to do a google search as I thought you misspelled leguaan as I always knew it as likkewaan. How did I come to know only the Afrikaans name? Come to think of it, how did my Welsh Mother come to know it by the Afrikaans name. She has one that pays her Joburg garden an infrequent visit! A big ugly bugger, she tells me. Aren't they all. Still fascinating though.

Such amazing photos. You couldn`t take ONE of these in my areas! I loved the leguan in the tree hole, no, all the others, too. Fabulous! I`m still shaking my head! That shy blushing rhino...and WATER in the dam...great. Each one has a story. I wonder what the porcupine could tell us. Was that the one that hid in the guest loo?

Gorgeous shots. I'm so glad you deviated from the one sixth photo to share six with us.

I love your pictures and hearing about life halfway across the globe from me. No possibility of capturing images like yours here in Seattle...well, except for the cloud, yes we have those...plenty of those clouds!

oh good grief, a person could hope and hope to see a porcupine and one just walks in to your house!!

It is unbelievable that a porcupine just pops in for a biscuit!
Wonderful pics. I like this meme, might just steal it!
xx

Beautiful photos and insightful commentary. Your award is well-deserved!

hi all - so glad you enjoyed the pics - pretty odd assortment i thought :-)

I forgot to tag the meme on but i guess anyone that feels like doing it can consider themselves tagged??

These are fantastic! Love the white rhino pic, and the boat? Now that is strange.

Yes I wave at clouds, all the time actually. That doesn't surprise you, I'm sure.

Yo've been awarded the Life is Grand Award. I nominated you for this award because you make me smile with your posts. In return you need to list five reasons why Life is Grand and nominate five more people for the award.

If you choose not to do this, it's OK with me.

Fabulous pictures. I often talk to the clouds but I have my head in them half the time.

All the photos are wonderful, especially the lizard...it blends in so well with the tree bark.

Hey, Val, I wanted to let you know that I am finally completing the 10things that are important to me...using the letter "f." (It posts tomorrow.) Thanks for tagging me, and I hope all is well.

Just wanted to tell you I wrote about you in that meme Fire Byrd tagged me for.
We are waiting for new stories!

Reya - glad to know you also would wave.......
this cloud looked exactly like a person flying thru the sky waving, but it didnt show well in the photo

Marilyn - wow thanks! i will do the meme cos Life is Grand :-)

Barbara - thanks yes his camo is amazing

thanks all for commenting - i so appreciate your responses xxxx