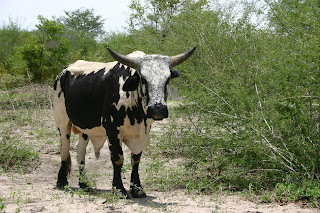 It was a sunny day in the lowveld. After lunch I was catching up on mails, when K announced he was going to Hoedspruit to buy molasses for the wildlife. He planned to put two feeding spots near the house so we could see the kudu, and eland etc coming to slurp the syrupy substance – sweet relief from the parched veldt.

On the way to Hoedspruit, his friend H phoned, or his son actually. They had some cattle stolen off their farm near Gravelotte. Another farmer had tracked them through the cut fences and found the cattle, but he wanted us to go and see if any were his, and if so how many. H had left his farm at Gravelotte only the day before, because there were reports of poaching on his game farm near Witbank – four hours drive away.

So we quickly finished our shopping and raced over the Gravelotte. There followed several hours driving around the area, visiting farms, and trying to track down the missing cattle. Stories varied – it was hard to know how many exactly, and even harder to find out at which farm they were now being held.

We bumped into a farm manager, J, who was on the same mission having lost 36 cattle already this month to cattle rustlers. We swapped cell phone numbers with J, only to find our cell phone was running out of power and we had no charger with us. We made a vow to always carry torches, phone chargers, first aid kits and tools, for such emergencies but it didn’t help us then as we had none of the above with us.

We went to visit the farmer who had alerted H to the problem initially. Driving into his farm we passed sleepy cattle, their soft looking hides falling in folds around their necks. Then we crossed a cattle grid that separated the game section. Young giraffe blocked the road, and had to be encouraged to move. Further on huge herds of dainty impala trekked to feeding spots across dusty ground. At the house a massive flock of wild guinea fowl competed with free range chickens for grain. Two brown dogs came bounding out of the garden, tongues flapping in the wind, to throw themselves enthusiastically at the visitors. One received a hearty slap for his troubles, and then was much more manageable. The farmer was out, but his maid came to the gate and the tri-lingual discussion began to try and establish some basis to the missing cattle story.

Collecting H’s cattleman, Wellington, an old fellow in ragged red overalls, we followed vague leads over to the Makutsi region. The sun set, darkness settled faster. We feared the worst, as the rustlers were bound to return to collect ‘their’ cattle that same night. We searched the sand road for signs, until we reached the main tar road to Tzaneen. Returning empty handed and dispirited, we bumped into J, who had spoken to the Police and had confirmation of the whereabouts of the herd. Bakkies raced back and forth in the inky darkness raising clouds of red dust. Another farm manager, name of C, led us to the kraal where the cattle were, but it appeared they had been released again and taken to a far corner of the farm – allegedly by the rustlers who had probably slept the day in the bush nearby.

We sat by a waterhole while C and J searched the farm, spotlight beams slicing the night. A clear Milky Way stretched unhindered over our heads. Fireflies winked over the water, mimicking the stars, and frogs croaked the onset of summer.

Leaving Wellington to herd the cattle to the gate again, having borrowed a torch from C, we drove to Lourene lodge to use their phone to call H and give him an update. There the owners were happy to tell us that they could have stopped the whole thing if their staff had told them sooner. They expanded on the problems of stock theft, and fears that a syndicate is controlling it. Over 400 head of cattle have been stolen in the area recently. That is big business for someone. Many of the farms have absentee owners, or are so large that it is easy to work one section without being seen.

H arrived, having driven from Witbank. We returned to find Wellington already on the road with nine cows slowly walking along. We followed at a snails pace. K and I in two vehicles were using our lights to show them the way. H and Wellington were walking with the cattle. H’s long spare form slipped easily into a pace of walking that told of a lifetime of walking with cattle. The long horns of the two Afrikaner cows illuminated in the headlights, with the younger calves trotting alongside.

It was slow traveling. The cattle already tired from the last 24 hours antics, having walked some 100kms from their home farm to the place where they were held. Eventually we reached Lourene’s horse camp, and ushered them in there for the night, thankfully driving on home. Drove into our gates at 1am. After a cup of tea, I went to bed and left the men to see in the dawn over a few bottles of wine.
This morning they have gone to finish the great cattle trek and bring the poor creatures’ home to Gravelotte.
Posted by Val at 10:32 AM

What a story, and what mean thieves you deal with, and what a beautiful description of the roadside wildlife and the milky way above and the functioning neighbourhood...I was walking right behind those cattle behind Wellington, in that nice slow walk (and had a cup of tea with you, of course, in the middle of the night). Hope you find all the other cows, and also the thieves!!

Oh Val, I do love, through your wonderful blog, being able to share the sights and sounds and smells of your African world.

good heavens.. poor cattle, so glad they were found and rescued! loved your description of sitting by the waterhole in the dark.

i totally relate to the need for all those useful items in the car, you just never know do you, in the kind of places we live in!

I know that this is a true story. I know that your life is real, as real as you are (and I can "feel" you out there, as real as rain, every time I read your blog), but my life is so very different from yours that sometimes your life seems like a movie I'm watching.

You're such a great writer. You put your stories across with so much potency, immediacy (sp). Wow.

As always, I feel so lucky to know you. Thank you so much, Val. Keep writing, please!

Amazing. I was reading this thinking it could be a movie. Things like that don't happen in my little corner of the world. I so enjoy reading about yours!

thanks everyone for your kind words - i so enjoy reading your commentsx
Angela - so nice to have you with mex
Tessa - thanks so much :-)
Karen - yes and i still dont have all those things organised. must do it...
Reya - oh yes its all real I promise. I feel lucky to know you too x
Debby - thanks for stopping by

Wow! This does sound like a movie or epic novel! In some ways it reminded me of an African version "Lonesome Dove." (If you've never read that one, I would highly recommend it.) Thanks so much for sharing this story. I love reading about events that are so different from those of my own life.

Who is the author, Adrianne?
Yes, I think you just need a camera to follow you every day, Val, and we`d all be stunned watching you! What a life. Make a movie of it!

Oh what an adventure, beautifully and grippingly told.

Like you, I too must get my car "kit" organised, although while some things are the same, I need a few different things for dealing with the big sub zero temps here.

You have such a gift for transporting the reader to where you are in the world Val. It is a joy to read your stories even if the subject matter is about a difficult situation that had to be dealt with.
xx

Hi,
Your blog is really interesting... Good Luck... You are welcomed to my blog…….
Wishing you in advance "A Merry X'Mas and A Happy New Year''

Larry McMurtry is the author of "Lonesome Dove." There's also a tv movie adaptation starring Robert Duvall that many people rave about, but I have never seen it -- it would ruin the vivid movie that occured in my head as I read the book. Although I love Robert Duvall, I cast Sam Elliot in the leading role.

Gives meaning to the expression - Africa is not for sissies!
x

Adrianne - I loved Lonesome Dove - read it ages ago - you have reminded me its time for a revisit.

Rob - and i still havent done it.. have you?

Fire Byrd - many thanks and i love your blog!

Femin Susan - wow I went to your blog - that veggie art is AWESOME; you are so clever and imaginative. Thanks for visiting mine.

Lori and AB Van - haha....its just the craziness of it all