the good that elephants do 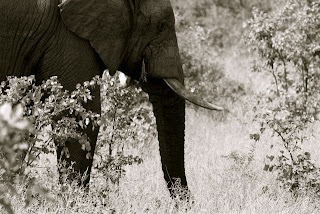 Given that we have reduced elephant habitat to tracts of land that cannot be used for agriculture - either arable or livestock; generally speaking of course. Most of the game reserves where elephants are allowed to live today are in semi desert terrain and often on international borders;  Given the choice, elephants prefer to eat grass, but in these areas, grass is often a very seasonal commodity, so for the rest of the year they make do with the rough bark of hardwood trees.  This often makes them unpopular with people who love trees - but elephants need to eat something after all.

And woebetide the elephant if he happens to stray out of his designated area in search of something more palatable to eat, or cleaner fresher water.  He instantly becomes labelled a 'rogue' elephant; or a 'rampaging' elephant - none of which he truly understands, but makes his reception very hostile and is usually life threatening.His life could depend on semantics in this way. 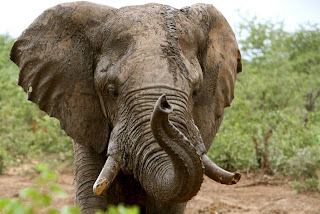 However, from a non scientific standpoint and in defense of elephants, what some see as destruction, is often a very vital contribution to the health of their environment.  First of all they have a very vast digestion, and their droppings are muffin shaped balls of instant manure.  The seeds they eat receive the required heat treatment in their journey through the elephants digestive system, to enable them to germinate successfully on return to the ground.

Elephants pull down branches of leaves from tall trees, in order to browse the furthest leaves.  This enables smaller browse dependent species to access food sources even during the driest months.

Young elephants strip the bark from trees, often ring barking them, during seasons when the sap is rising. This could be seen as a bad thing, as the tree usually dies.  But it creates clearings in a forest, and prevents the forest from becoming too dense. it also creates habitats for birds and insects, and small tree dwelling animals. Not to mention firewood for human campfires.

Big bull elephants push down trees. Sometimes this is interpreted as a show of strength, or a feeding requirement; but it also has the benefits of making fresh leaves available to smaller browse dependent animals; it creates habitat for ground birds and small predators, and often assists with preventing soil erosion.  Have you noticed how often the tree happens to fall across a bush road? 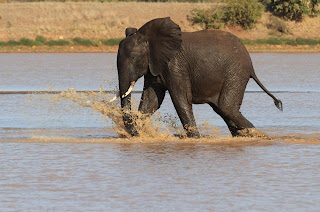 Elephants make wide clear paths that meander through their range, linking waterholes. If you are lost and thirsty, follow an elephant path to water - but keep your eyes and ears open!

A herd of elephants make less noise travelling through a forest, than one or two people.

At a river crossing, we once saw fish using the underwater elephant tracks as nesting sites. Each round indentation had a resident parent fish guarding their eggs.

I am sure there are a million more ways that elephants contribute to environmental health within their range states, but these are the first few that spring to mind. I also know it is extremely good for our heart and soul to spend time with elephants when they are relaxed and feeding or travelling on long ancient paths. 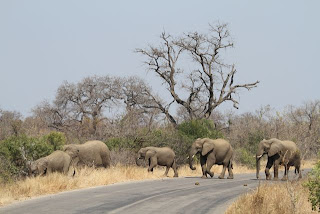 Of all footprints
That of the elephant is supreme.
Of all mindfulness meditations
That on death is supreme.
— The Buddha

Elephants are wonderful animals and you are so fortunate to have them as neighbours. It must be so exciting getting to know them. I wish that the elephants had more green grass available to them. We all want happy elephants in this world......(they have to watch out for all those rogue people!)

Everyone bitches about the 'damage' ellies cause and that it takes sooooooo long for the veld to recover -- think about all the young shooting tree plants that are grazed by impalas . . . . . GO FIGURE who does the most damage

I am due to do ellie tracking with some of the CITW kids next month. Super excited and hoping that it all comes together and then I can supplement this post with additional positive ellie info.

I love this, Val. How majestic they are, how quiet, how they create ecosystems with their footprints.

Mermaid - elephants are amazing, it is wonderful to be around them. and yes - rogue people is absolutely right!

Janet - impalas also do replanting with their sharp hooves;its obvious who is damaging the planet most. have fun with the ele tracking - cant wait to hear all about it. I agree - elephants need some positive PR!

Kerry - that scene with the fish nests was pure magical wonder.

Mermaid - elephants are amazing, it is wonderful to be around them. and yes - rogue people is absolutely right!

Janet - impalas also do replanting with their sharp hooves;its obvious who is damaging the planet most. have fun with the ele tracking - cant wait to hear all about it. I agree - elephants need some positive PR!

Kerry - that scene with the fish nests was pure magical wonder.

thank you for this val, i learn so much from you. theres always more to a story and you've . the elephant is much less maligned here, if that helps. everyone seems to love them.

Thanks for reminding me how much I admire elephants. Not sure if you know James Weis from Eyes on Africa, I am going to email you some photos he took of elephant hyena interaction. Peter F

The last few weeks I've been working on a primary school reader for a UK publisher about elephants. I thought it funny that the reader is for Spanish children considering that their king was just here hunting elephants. :( Put a big section about hunting elephants and why it is wrong in the book. :)

I hear that ivory is back on the market and in great demand in China.

Your view of elephants should be made a compulsory subject in countries where poachers hunt them. How can we continue to destroy the life of our planet when we know that means we destroy our own environment.

hi Lori - thats good to hear -and they are loved here too by many; they have so much to teach us.

Peter - those pictures of the elephant defending her calf from hyenas are astounding - and a good metaphor for their struggles generally dont you think?

Lauri - thats ironic! glad you included that in the story.

Friko - the Chinese and Asian markets are stimulating the catastrophic decline in our rhino and elephant populations right now; not to mention all the smaller and less glamorous creatures.

Thank you for this post, Val, yes, it should be made compulsery, especially in CHINA! I just read that the hormone oxytocin has been found out to do much more for men`s erections than any horn of a wonderful African elephant can ever do (I liked the idea of sending cut-off toenails to China, they should have the same effect!). Lots to be said on this subject... but your way of praising ellies for what they are and do is so lovely!

Beauty is in the eye of the beholder, an opinion is always colored by the way a person looks at it.
I've been surprised so many times about the intelligence of mother earth that I can not believe that anything on earth is worthless. And if a species most be proclaimed useless it that species were I belong to.

Angela - one wonders how a nation that is so ahead on matters of technology, can still believe that rhino horn can cure all manner of things - when it is the same keratin as human hair - and then to hunt the source to extinction. as you say - lots to say on the subject! x

Joost - indeed no species can stand alone anyhow - and we humans need to recognise that FAST. somehow we have thought to separate ourselves from our own universe. it can never work.