the cobra and the red toad

We have been travelling and static, busy and idle, social and solitary, content, conflicted and then contemplative, and lo the time passes.  There is a whisper of winter in the air although we have had some late summer showers.  The tadpoles in the waterholes have all become little active frogs and somehow manage to find their way into our house at night.  I spend a good hour every evening trying to catch them and put them out side, feeling a little like the Flintstones ejecting that dinosaur to no avail.
But my motivation is snakes.  They follow the trails of the happy little frogs, and I am not mad about snakes in the house - especially at night.

So yesterday there was a mozambique spitting cobra in the kitchen. We didnt have time to catch it as we had to go out, but we left all the doors open and hoped it would find its own way. When we got back, there it was on the stoep.  It had obviously zapped a red toad who was lying there with one leg sticking out.  The snake moved away when i came outside but soon came back to claim its kill.

There is something grotesquely fascinating about watching a snake swallow a prey item that is way way bigger than its own head. So i thought i would share a few pictures with you.  Not all the pictures are sharp - sorry - but I hope you can see enough to get the story.  The cobra is about 1 meter long.

(Not for the squeamish) 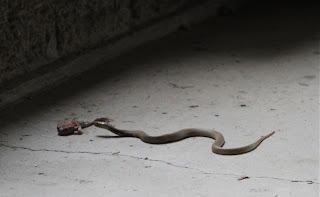 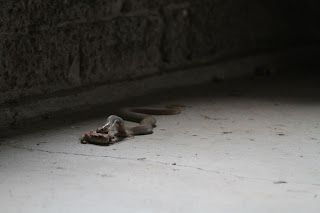 the snakes body is very active at this point, and the tip of his tail keeps seeking for cracks and crevices in the wall behind
however sideways was never going to work 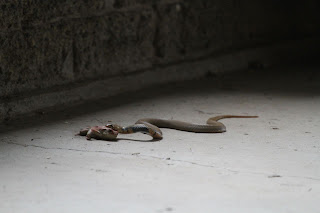 manouvering around to a more manageable position 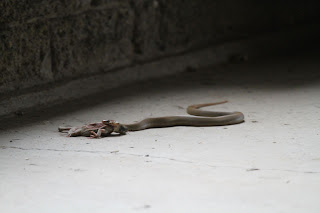 head first and the swallowing begins; the snakes body is more calm now 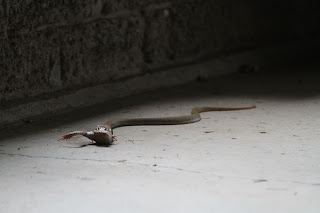 down the hatch all the way to the pelvic region 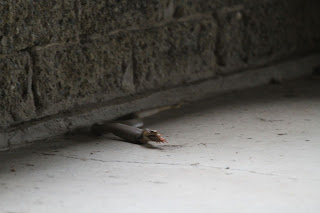 Now THAT is one of the reasons why I am glad I do NOT live in Africa! And scorpions of course.
Good telling pictures, and as usual your wonderful picturesque writing... great post Val, I love to come here!

This exotic vignette reminds me of the drawing sequence of St. Exupery's The Little Prince when the boa constrictor swallows an elephant...
I'm so glad to have found your fascinating world, enjoying your blog very much!

I loved the opening sentence!....i am feeling much the same....Snakes have to eat too.....even if they are not my favorite reptile, I admire their spirit and energy....so fascinating. Having a snake in the house though would be the ultimate creepy.....would a house cat or dog flush him out? Do you have pets? Leaving the door open to let the snake out!...but what else could get in?

haha, i am selfishly wishing you had used at least a 300mm lens. nature is facinating. i like frogs and snakes just not in the house.
:)

haha Geli - snakes and scorpions are best avoided i find, but are also brilliantly fascinating as long as they are not under your feet or climbing into your bed.

Lily - ah yes a boa swallowing an elephant would be about the same thing - well a small elephant anyhow. I am glad you found your way here too!

Mermaid - snakes are fascinating, and some see them as symbolic of change because of the skin shedding thing they do; however, i prefer them if they are not in the house - that sight of a long tail disappearing behind the furniture...No we have no pets as such and leaving the door open was definitely a hopeful gesture. luckily it worked this time.

lori - i did use a 400ml; didnt want to move closer as i would have chased the snake off its meal, and the light was fading fast. sorry the pics arent more clear.

Hi Val. Finally made it round here! Have enjoyed catching up from the floods, onwards! thanks for the squeamishness warning, I'm definitely one of those people, although I've nothing against the predator and prey situation, of course! Absolutely loved the "Sunday Park off" photo, and that tree bark..

All my life I have a relentless inner fear of snakes. Maybe because we never got to know them up close because they do not live here. The times I meet a snake up close, I kept unexpectedly quiet and the fear turned into respect. But still I always watch where I walk, with a nice extra present that I will also get to know the ground my feet are walking on .

A good friend of mine (with a big heart for snakes) once asked me what I would do if I had no legs and arms and someone much bigger than me planned to step on me.

But for sure they do have a very healthy appetite.

Yikes! I hope he ended up outside! It is fascinating... I'm not particularly afraid of snakes in general, but poisonous ones are a different matter. However, I rarely kill a snake... once a rattlesnake that was in the pasture close to my horses... it went to snake heaven.

hi Karen - welcome back to blogland :) loved your catch up post and photos!

Joost - found another snake this morning - snouted night adder - really pretty and trying to avoid being stepped on by k's feet! luckily he was fast and agile!

Cheryl Cato - i wonder what snake heaven is like... not sure i'd like to go there; its probably full of frogs and baby mice. We prefer catch and release too but sometimes you just have to draw a line.

hi Karen - welcome back to blogland :) loved your catch up post and photos!

Joost - found another snake this morning - snouted night adder - really pretty and trying to avoid being stepped on by k's feet! luckily he was fast and agile!

Cheryl Cato - i wonder what snake heaven is like... not sure i'd like to go there; its probably full of frogs and baby mice. We prefer catch and release too but sometimes you just have to draw a line.

Annie - thanks for 'following' - its great to meet you too. am off to your blog now.

Fascinating! Quite fascinating. I am so glad you thought of shooting the sequence. I don't find it at all repulsive although I thought I might when I read your intro.

Friko - the gruesome part for me is that the toad is paralysed by the venom but alive. Cant help finding it fascinating at the same time though.

OMG I don't do snakes!!!! Eeeeeeeesssh.
Thanks for sharing though - it is fascinating.

Grimly fascinating. I think you have to be born to having snakes around - I don't think I'd ever get used to the idea of finding one in my kitchen. I don't find them creepy though, or repulsive, just wouldn't like the idea it might be a poison one about to bite me!

Wow! It's cool that the snake maintained enough presence of mind to come back for its prey, even after slithering off when you returned home.

Astonishingly marvelous!
I wonder how long that snake will be able to go without food now. All winter?

Janet - haha but you are a bush girl!

Jenny Woolf - well yes, i do love snakes and find them fascinating, but i am not wild about findig them in the house for the reasons you mention. they are more likely to bite or attack if cornered in a house.

Steve - it must have been quite hungry. snakes get much more active just at the onset of winter, as they need to eat as much as they can before cold weather slows them down. Also there is a harvest of baby frogs to be reaped.

Katherine - it would probably take more than one meal to stock up for winter, but yes, a mouthful that large should sustain it for a few days I think.