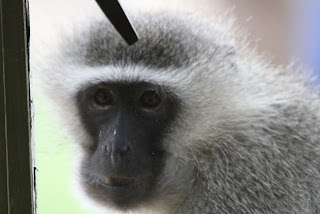 There is a new monkey on the roof.  He came in through the front door. He picked up the last remaining apple on the sideboard and moved into the lounge.  I heard a noise. I was home alone. It was a tiny noise, like a button falling. Monkeys can be quiet like this. I went to investigate and there he was perched on the sofa eating an apple.  All the doors and windows were closed. I was afraid he would panic and try to jump through a window or something equally dramatic. When this has happened before the culprit often bounces of walls and bookshelves before diving for the closed window.  But this is a new guy. He has house cred. He looked at me and continued with the apple.

I opened the door to the stoep and got serious about asking him to leave.  He moved under the table and slowed down a bit, waiting to see if that was far enough. It wasnt.  Then he was out. Maybe he spent Christmas at a nearby lodge.

Christmas ah, how was yours? 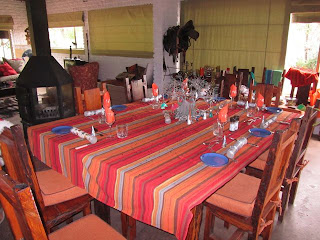 Christmas apple ... wonder what recipe it was dreaming up while perched, scoffing on the couch??

hi Janet - ya completely different manners to our usual troop; it was quite wierd he looked so at home :)
i had such a cool time with my niece so we had an early feast before they left. since then so quiet you can hear a button drop; have a fun NYE - start as you mean to continue! xx

He sounds like he has manners - maybe he can teach the others!
Here's wishing you a Happy New Year and all the very best for 2012! xx

ah, lovely table dear val, and i can see why the little guy wanted to come in to such an inviting place.

now if only i had such a story to tell. no monkeys here. but my christmas was lovely with kids home and lots of down time around the fireplace. back to work next week!

buckets of good wishes for the best in the new year to you, val.

Possibly bestowing good luck for the new year ahead? I hope so, Happy New Year!

maybe you will have to rename your blog 'monkeys on the couch' ? tee hee.

I love the idea of a monkey with house cred :) I know I've wished you happy New Year about a million times already, but since it is really New Year's day now - here's another one! Off to the river now...

Nicky - maybe you have a point there - thank heavens no calling cards on the sofa!!

Amanda - there was even a place for him at the table but he had already eaten :)

Lorac - i sure hope so - like the bluebird of happiness?

Lori - hahaha the couch potato monkey... yes its time for another meet up somewhere!

Karen - yup he had it - house cred. not sure thats a good thing.

I am late, but out of words anyway. What a visitor! Sitting at your table, eating an apple. At times like this, when no one else is around, I always hope that they will suddenly speak. Say something like, Hey, nice house. Where did you get the tablecloth?
I already liked your porcupine visitor, and the lions watching TV with you, but a monkey house guest... Africa really is different place!

Wishing you a happy new year but you really gotta start keeping that front door shut! :)

Geli - he looked amazed that we were so rude not to make him feel entirely welcome on the sofe. A bit embarassing really.

lgsquirrel - haha you have a point there

That was quite a guest! But he had manners. The only time I remember we had an unusual guest in the house was in a cabin in Montana – a bear came in, but we were not there luckily. He did a little bit of damage in the kitchen.

You sure it wasn't that big monkey that speaks dutch?
Can't wait for your next posts!

Greetings to you two

Vagabonde - hey a bear in the kitchen - sounds a bit like Goldilocks; was he looking for porridge? probably a good thing you were out at the time!

Joost - you know, funny you should say that but...
next time i will be more chatty :)