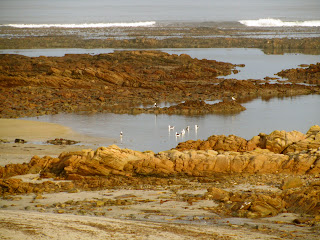 So how did this start.  I think it was an article in a travel magazine read sometime ago. A one page story about how a remote coastal village on the edge of the desert subsists on diamonds and tourism. A cold water bay inhabited by seals and seagulls, where atlantic mists roll in at a moments notice blanketing out the bright sunlight.

Here intrepid deep sea divers hoover gravel off the sea bed with giant suction pipes attached to robust trawlers. The gravel is sifted for diamonds, and these are brought to shore and sold to the concession holders. The trade is strictly controlled. 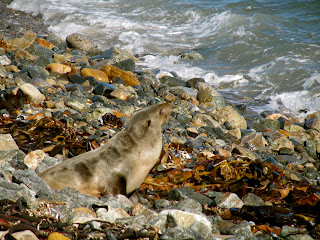 Diamonds can cause so much trouble.  They are glittery and gorgeous, and their main use is to adorn the lobes and limbs of the rich and famous. Somewhere on the path from seabed or diamond pipe, to end user - there can be a wealth of stories involving skullduggery, ingeniousness, and master craftmanship. 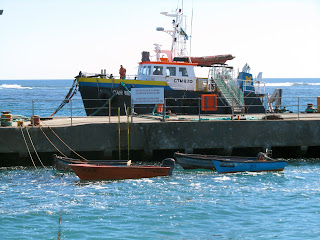 Blood diamonds are those taken from war zones, and traded for weaponry to continue violent wars that are often about the diamond resource itself.  They sparkle just as much as legal diamonds.

We became intruiged. Port Nolloth had to have a few intreresting characters walking about. We hadnt been to the west coast in a number of years but as a destination it was very far away.  Then there was a birthday, and that called for something out of the ordinary.  'Lets do it - even if its far?'  'right'. 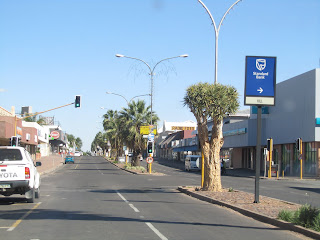 It was two days solid driving.  Firstly circumventing the city sprawl of Gauteng, and then the endless corn fields of the north west province.  When we got into the wine growing regions along the orange River the view became a tad more interesting. Its always good to see how much effort goes into growing wines.

From here the towns became progressively smaller and the landscapes grew into vast ancient seabeds where black rock mountains floated like glaciers.  We left the other road users behind for a time - there was just us, the giant landscape and the endless blue skies. Desert was all around and we felt ourselves slowly dropping in altitude with each mountain pass.

We fuelled up in the little town of Springbok. It was close to sunset and this was some of the most dramatic scenery of the trip.  Rocks and boulders with strange desert plants towered close to the road. This area is famous for wildflowers in the winter but we were three months too early.  We wound down through successive mountain passes  and then there was sand. And then there was the sea.  A small settlement of houses, like coloured boxes nestled behind the dune and the town.

It was quiet here. The sea crashed on rocks beyond the bay, but nearby it was gentle and calm.  Strands of kelp lay on the beach or rolled lazily in the waves like seals.  We spent two days here in this tiny town where time appears to stand still.  Due to recent rains there was no diamond hoovering in progress as the river mouths were too clouded with soil from flash floods; and thus many of the diamond divers had left town.  We drove along the coastline to Alexander Bay. A diamond settlement at the mouth of the Orange River border with Namibia. This town used to be high security. All along the way were diamond diggings. This desert landscape  of lichen fields and fossils,  has been successively poked, proded and excavated in a perpetual search for these earth born treasures.


We chatted to the few locals we found. We went to the little museum and looked at relics from shipwrecks and pioneering mining efforts. We even looked at property for sale.  We ran out of time and buckled up for the long road home, promising ourselves a rerun  when the whales pass by and the desert sands are speckled with fields of flowers.

Oh, my. I South Africa-sick all over again now...

Thank you for painting such a heartfelt travel log, and taking us along.

Another interesting journey through a landscape that is so unfamiliar, yet compelling. Such a wondrous land must be a marvel to live in. So far away from the western lifestyle though. Do you feel like a stranger in a strange land or have you become one with the land? I hope you are writing stories and books....you are wonderful with words!

I enjoyed this, Val - nice piece of writing.

oh Val, what a fabulous birthday trip you went on happy birthday again! It sounds wonderful, i would've enjoyed this all so much.

i would love to see more photos, hear about your dining experiances, and did you get to eat cake? was the weather warm?

i have not been this far north on the atlantic side, but at the moment plans are being laid... (yes!)

Hi Val, I love your beautiful description. It sounds like such an intriguing place, worth a second glance! We also had a feeling of having missed out on whales and flowers in that area, and will most certainly go back "sometime"

this sounds like a worthwhile adventure to me. i love road trips. well, any kind of adventures really :)
beautifully written
~laura x

I love the coast on that side of the world. When I was reading your post I kept thinking about Luderitz, a sad haunting place.

Eleonora - when are you coming back this way? I tried to upload more photos but its just not happening connection wise. Pity because it was such awesome country.

Mermaid Gallery - and you live in a place of grand landscapes for sure! Mostly I am beset by wonder at the landscapes and creatures of Africa. that desert though... its incredible.

Solitary Walker - thanks and with your love of lonely places - this would surely appeal to you :)

Lori - thanks and HAPPY BIRTHDAY to you TODAY TOO XX sorry i couldnt get more photos up. I will try again later if i get the chance. Loaded a whole lot yesterday and theyjust vanished in the ether! great that you and Chuck are planning a trip - wild flowers and whales are August i believe x

Laura- yes road trips are by far the best - especially to new and unusual places!

Lauri - havent been to Luderitz - yet. But I think it must be full of ghosts. So much to do and see here! I like that west coast too

How beautiful. I felt like I was on the drive with you. What a gift.

Intriguing - I think I need to add the area to my "list". There are some lifers for my bird list there too . . . .

Never been to that area but it has always been in the back of my mind. Maybe on a next trip to SA, or maybe we should just come home.
Regards