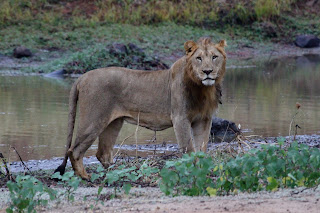 We went out looking for the lions yesterday.  Recently some zebra and wildebeest were caught in poachers snares in the reserve. It was a remote area and nobody found the carcasses - but the lions did.  No doubt they heard the distress cries. Lions and hyenas moved in to claim the kills. Some lions were caught in snares in the process.  Being caught in a snare is a slow and painful death.  The lion research group, tracked the lions to the scene of carnage. By then most of the animals caught in the snares - including some of the cubs that had visited our house - were dead. One lioness was still alive - she had caught the snare between her jaws and her face was severely wounded as a result.  She has been sent to a rehabilitation center where her physical wounds should heal in time. I am sorry if this is shocking, but this is how it is.

We heard that the lions had moved back into our part of the reserve.  There are now only six lions left in this pride - the big male and his two askaris (sons),  two females and one young daughter. Three of them are wearing collars which allows the research group to find them and keep track of their lives.  We also have a receiver, although ours is a little more antiquated.  In this area it can be very confusing as the signal can bounce off the granite koppies and lead you in totally the wrong direction.  We found the signal just around sunset. The whole pride were still together, so we drove on a small track around a group of koppies where we thought they were.  The pride in its former glory had once spent several weeks based in this koppie when the cubs were too small to travel far.

As darkness fell so softly, and swiftly, the dry yellow grasses and small bushes, all took their turns at becoming monochrome lions.  A movement here or there, a sound of twigs cracking, a swirl of yellow grass -  pulled our attention in every direction waiting for the gods of the night to enter the scene.  We followed tracks and strained our ears for sounds of their calling - but who would they call to now anyhow?

It grew dark. The pool of our headlights took over from the gathering dark.  We stopped to listen.  Suddenly, morphing out of the grass and trees came two lionesses, the soft sound of their large footpads hitting dust were all that told of their appearance.  They strode purposefully - no social graces this time. They looked rangy, feral. They walked straight to the back of our vehicle and in turn, had a look over the side before moving on and fading into the dark again. Were they ghosts? We wondered if they associated the vehicle with identical ones used in the capture and translocation of the snared pride members.

The big male followed on their trail making soft growling-purring noises. He too visited the back of our vehicle and then walked on.  Next the two young males and finally, the youngest remaining member of the pride - a female sub adult.  She alone stopped at the edge of the clearing and looked at us, stopped a while, and then walked on.

We turned to follow them and there in our lights was the young female, waiting for us - as the whole pride used to do.

Oh Val, the reality of the hideous cruelty to animals that abounds in South Africa is heart breaking.

It seems to me that you should make the most of your wonderful, magical encounters, because the way things are going in Southern Africa, you are baring witnessing to the final days of wildlife as we know it.

Oh shit!!!! (I had to censor myself here as my anger boils)

This is awful. It sounds like it was a field of snares WTF???

All individuals going to the back of the vehicle - immediately reminds me of the lions at the Rhino Lion Park in Cradle of Mankind. They do that at feeding time on Sundays. Makes me wonder...

This sort of thing just breaks my heart. Having worked with the wild life research officer in Zimbabwe many years ago, I have seen what snares can do. I just wish there was someway of snaring the poachers with out the animals being caught. I hate cruelty of any form but I would be happy to see the poachers swing. Diane

Janet - from what i can gather it sounds like snares set all about a waterhole - there were eland, watrbuck, hyena caught as well - i suppose at various times but the snares not checked, just left.
we wondered that too about the back of the vehicle, it did look like that, but vehicles like ours are used in the capture translocation too and the memory is still pretty fresh i think. can only guess.

Diane - it is heartbreaking that such a small percentage of the global community finds any merit in preserving species and habitat. but we keep trying :)

sorry i am still trying to get the pictures to upload; no they are not pics of snared animals, just general ones; lions were busy working on the next generation when we saw them so with luck life will go on and the pride will recover. xxxV

Wow! It is always an adventure for you! I so enjoy coming here! I haven't been around for a while, but I did miss this blog.
Be careful out there.

I hope there are stiff penalties for poachers. It is so disturbing to read of such cruelty. My heart breaks for the pride,..... and for the rhinos....Why is there still a market for things poached? Do the people of Botswana protest these events or is considered just part of the culture? Such a different world....yet cruelty exists here too. We seem to lack respect for so many animals. We are not far removed from the jungle ourselves and that is a crime......

What slaughter. This is difficult to read about, but so much harder for you to experience it with animals that you know personally. I would cry buckets.

I am so glad that Bonnie introduced me to your blog. This post is absolutely fascinating. You write well and you have something to write about, which isn't true for most of us.

I am going to follow you. I don't want to miss other such posts.
I saw that you have put my blog into your Blog List. Would you be so kind and acknowledge this on my blog by following me via Google Followers, please.

This is just so heartbreaking. Snares are evil.

Choices - glad to see you again - where were you?

Susan - there is a lot in the press at the moment about poaching - especially rhinos; there are people working hard to secure wildlife areas. Around here its not about starvation thats for sure. and yes, tragically the market for illegal wildlife products just seems to keep growing. In Africa 'bushmeat' (which is anything) fetches higher prices to supply the whims of the wealthy. Its horrific :(

Kerry - yeah we are crying inside :(

Friko - thanks and likewise! I will try to join your followers as soon as internet permits.

You make the world a better place.

you know how i feel. ugh.

in zimbabwe we saw at the wild dog rehab, artists making jewelry with snare wire poachers had left behind in the bush. at least there was something beautiful to come out of a very ugly thing.