Yesterday we were driving in the reserve. We found a place where a
leopard had dragged his meal accross the road. We followed the track
and found the remains of a young waterbuck. Most of the body had been
eaten, but there was still quite a lot of meat on the legs. The kill
was very fresh.
The menfolk pulled the remains back along the track and tied it with
a piece of rope to a huge fallen log. They then fixed the camera trap
to a similar log a couple of meters away, and off we went.
Lions were calling in the night. It was so fabulous to hear them and
know they are back in this part of the reserve.
This morning we returned to the camera trap. The massive log that the
water buck was tied to, had been dragged right up into the forest.
and this is what we found on the camera 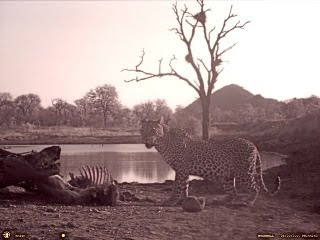 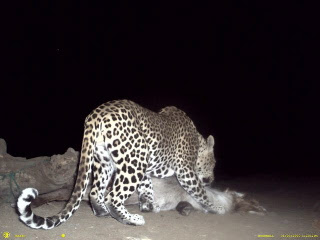 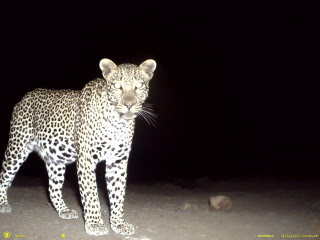 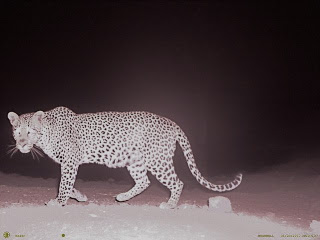 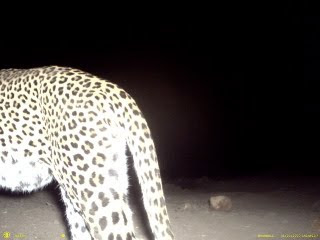 That just gives me goose bumps, the leopard is my favourite animal. Thank you so much for sharing this. Diane

hi Diane - they are incredible arent they? and just impossible to see in this landscape of granite koppies and thick mopane forest..this one gave us a royal showing though.

That is pretty incredible, a sight you don't see everyday. Amazing pictures.

WOW - it's like being admitted to an inner sacred sanctum - I sit here wide-eyed and at a loss for words.

How wonderful to have such direct contact with wildlife!

so cool...I love the pic of him staring at the camera like he intuitively knew he was being captured digitally...brilliant to set up a camera there! thanks for letting us have a look too...love his spots!

That is so freakin' awesome!!!
Brilliant shots. How wonderful to see into that secret world.

Fantastic!! Incredible!! last night indeed! i love it. I would make that top photo into an enlargement and put it in a frame.

I emailed this post to Chuck and Lindy, i know they'll want to see this. Amazing!

Well done K and men!! and you for sharing ☺

p.s. so do lions and leopards not mind sharing the same territory then?

oh my god val these are completely amazing -you must have been shaking when you saw the results!

and that first, sepia toned still life with stick tree, rib cage of half eaten beast and leopard.

hehe - too good not to share! that leopard - how ARE those SPOTS?? there is a certain voyeurism to the camera trap, its true. but how else..?

Going to set it up again tonight xxxV

After seeing your pictures I got the Rudyard Kipling book from the library, to read to my kindergarten children today: How the leopard got its spots. These pictures are really hair-raising, Val! They are so BEAUTIFUL and yet so dangerous. Take good care!

Eish - what an awesome portrait shot of the awesome creature

beautiful leopard pics!!! there is so much to catch up on.. must have been pretty chilly here, given what weather was 'sent' up to less tropical parts of Bots! I am going to have to dig back and enjoy catching up on your blog... x

oh man! I just love spotties! these shots are brilliant - love the way it looks like it's well aware the camera is there! Amazing!

Lori - lions and leopards are in the same habitat but when the lions are around the leopards tend to stay away. Lions would kill leopard if they came accross them. :-(

Geli - did the kids enjoy the story? and how did the leopard get its spots? i must look that up x

Janet the camera trap is cool fun. You having fun with your stuff?

Karen - yes it turned cold again here. Weather behaving like a teenager! how was zim?

thanks for all your comments everyone - you know i love them and look at the lengths i go to to get them :-) take good care xxxV

Fantastic photos...I'm catching up on all your posts and photos. That leopard is just stunning. Glad you are well.

It feels like he is looking right at me. Amazing.

Those are great captures. I was wondering if there's a chance that it was the same leopard that returned to its half-eaten kill.

e - thanks - hope all well with you too?

Anil P - pretty sure it is the same leopard who made the kill. We didnt move it too far - just into an open area. She was probably watching us :-)

thanks for visiting xxV

Wow!! He/she is so BEAUTIFUL. Incredible pics. What a life you live, Val. Wow.

Fantastic photos, but that looks like a leopard to me. Am I wrong?

What a capture! Gosh. I'm looking forward to the next set.

Hi Val, I just gave you an award on my site. I love your blog and wanted my readers to know how exciting your blog is. Come and have a look! Best, Susan

Kristin - we were so lucky with these pics

Katherine - this is a hard act to follow though :)

Susan - wow thanks so much!! and i love the mermaid gallery too :)

thanks for all your comments and for visiting xxxV
blog on!

Wow - gorgeous animal - so cool that you can do stuff like this. Sounds like fiction to me - too unreal.

I love the third and the fourth picture.

Fascinating life you lead. Thanks for sharing it with those of us who only have squirrels in our backyard.