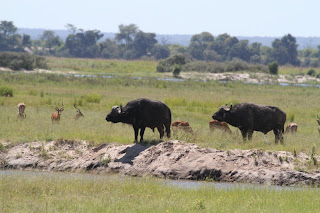 It was a languid still late summer's day. We hung in bureaucratic suspension, unable to proceed any further with the paper trail of documentation due to procedural delays. We threw in the towel – abandoned the endless waiting in shabby corridors of power – and headed into the Chobe National Park.
This part of the Chobe NP runs along the river which forms the border between Botswana and Namibia Caprivi. The Chobe River essentially floods back from the Zambezi. At this time, with the Zambezi steadily rising in its annual flood pattern, the Chobe River is spreading out fast. Rolling over floodplains, here and there throwing an arm across the sand track – in places it is more like a vast lake than a river. 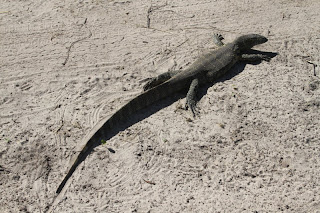 We saw leguaans (monitor lizards) exhausted from swimming to shore from their flooded island homes; hippos gleaming wetly in new shallows; buffalo bulls moving ponderously across the flooded plains. It was a scene as old as time itself.  So we pulled into the shade of a leafy rain tree and watched the pageant unfold.
In a nearby pool, a crocodile had an impala in its jaws. The fight was over, but he lay on the bank clamped onto his prey.  The impala herd wandered off, looking a little stiff necked, to find a way back to the forest.  A bull elephant stood alone on the floodplain like a giant monolith, as smaller beasts ebbed and flowed around him. He fed slowly on clumps of grass, stopping to brush the soil off each clump before lifting it to his mouth.
Behind him the river curved lazily away. 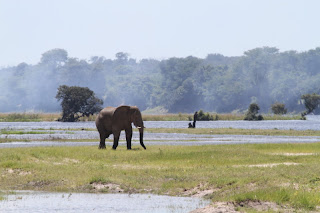 The midday sun shimmered off the dark water. One by one elephants emerged from the forest behind us hastening to the waters edge to drink thirstily. Breeding herds with young calves drank, and walked deeper and deeper into the water – until finally succumbing to the delicious cool.   They rolled and dived and pushed each other, ducking underwater with only the tips of their trunks up for air like periscopes; Climbing up on another's back and then sinking back in a spray of bright water. 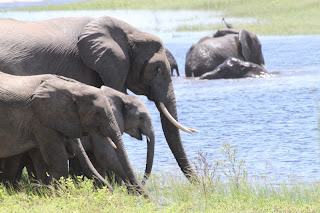 We watched them for hours.  Some of the herds climbed out on the far bank and drifted off to graze and mingle with the other elephants.   Some cows with very small calves, kept their distance, and after drinking returned to the forest. Their calves presumably too small to risk the crocodiles that moved between the basking giants.
We left them sometime later, still basking and playing in family groups. Driving on through the park at the rivers edge, we spent the entire day with elephants. Herd after herd were down at the river in the hot afternoon.  Some black from a good soaking in the water, others caked in mud from a happy mud wallow; some were frisky and wanted to chase us, others were mellow and calmly let us pass, gazing down at us through golden brown eyes. 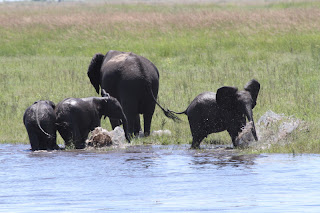 Elephants and Chobe – two words that are synonymous with each other.  It has to be the ultimate elephant viewing in the world. We left the Park as sunset splashed colours of gold and vermillion on the dark waters of the river – with images of elephant fields playing on our minds eye.
For beautiful pics and more info on life by this spectacular River please visit Karen at http://bordertownnotes.blogspot.com
Please consider the elephants when the Powers That Be vote on lifting the ivory trade ban.
Posted by Val at 1:36 PM

Your prose is liquid like the river and I delight in your descriptions of the elephants. Oh, to have witnessed them cavorting in and under the water! Thank you for sharing these scenes Val.

What a parade of animals you saw. I would have loved to be sitting right beside you watching up close and personal. I am glad that I was able to share with you through pictures and description.
Thank you.

hi Bonnie - you were quick! i was still uploading photos. Thanks for your kind words x

Choices - Chobe is awesome it is true. We had an amazing day out - especially as we were escaping from the choas of town paper trails :-)

As ever your words took me to the bank next to you. What a wonderful description of an amazing day, well at least to me.
Have a good trip
xx

Oooooooh thanks so much, I felt like I was there too. Makes me feel calm
xx

Sounds like a lovely trip. The photos are beautiful. The elephant issue is problematic.

How wonderfully you described your outing to a very special place - for Chobe is where my parents used to love to visit, ever since their Honeymoon.

The elephants are so clever! I wish our gelding had been so smart as to brush off the soil from the grass bundles he plucked out (he died of too much soil in his stomach). Someone has detected lately how much more elephants can communicate. I wish I could understand!
Beautiful, peaceful scenes, Val. A bit too hot for me at the moment, as we still have temps below zero, and the shock of feeling yours would knock me over!

if i could read with my eyes closed, i would be there....
love it!
thank you for taking us to africa with your elegant words val.
much love,
lori

Last month we went to West Palm Beach and saw elephants in one of the safari park. It was nice but not enough. I told my husband that we need to go to Botswana or South Africa next year. But even so, just staying a couple of weeks will never be like you living there and watching them anytime you like. Your blog is so special.