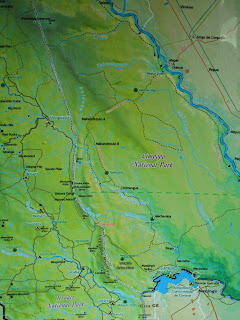 A week later and our world is drying up fast. The waterfalls around the house finally ceased to flow yesterday. The mud is still saturated and slippery, but the plant life is flourishing and the early sunlight glows through a festival of green. 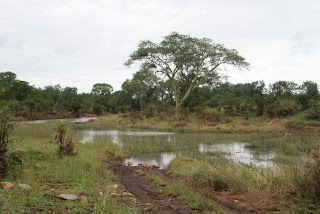 Sadly we had to call a rain check on our planned adventure to a remote bush camp in mozambique but in the Kruger Park, repairs are in progress at camps, and roads.  Rivers and streams are babbling brooks innocently sparkling in the sunlight as if they would never ever dream of that outrageous behaviour they showed us all last week. The only telling signs are the vegetation detritis hanging high in the branches of bushes on either bank. 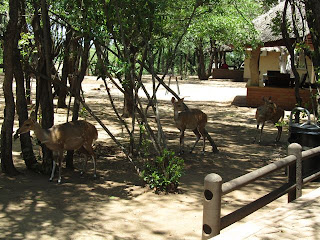 At Letaba camp it is business as usual and the border post to Mozambique is open again.  We drove through to Massingir with our friends from NYC - as a compromise and to make up for our mudshyness. Looking at the pools and wetlands on either side of the road confirmed our decision. 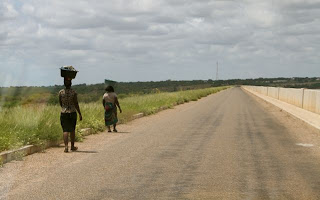 women with fish on their heads walking the Massingir Dam wall

The Massingir Dam was full of the brown water that flowed through SA in the past week.  As we arrived all the sluice gates were open. We drove around the small township and finally came to rest at a hotel type place with a view of the Dam. The warm aroma of bat guano seems to emanate from every place with a ceiling here but the ambiance was friendly and there were some ice cold beers. 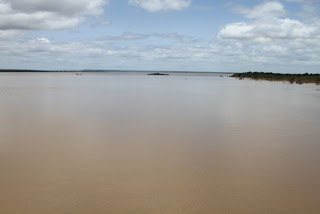 We had booked into some self contained chalets at the Park Entry gates - charming log cabins with thatch roofs and gauze windows.  The midday was sweltering hot . We decided to investigate the back roads a bit, and visit the other camp site and lodge.  The back road had been little used by anything other than cattle and firewood sleighs since the rains. Some villages had ploughed their new lands over the tracks, and another had sited their football pitch right across what was once the road. So its not suprising really that we missed the turn to the camp site. 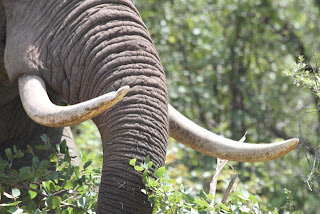 Our evening drive  became rather longer than planned but we did see one bull elephant and some lovely woodland scenery. The sun was setting and we had forgotten to pack the cool box, so all aboard became a little quiet and focussed until we found the main road back to camp. There was a moment of tension when I thought I had lost the keys, but soon all were smiling again and the night sky was clear and spangled with those glorious stars. 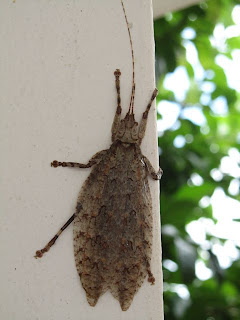 beauty in the eye of the beholder

Rumour has it there is another tropical storm or cyclone off the east coast but so far we are looking at clear blue skies. 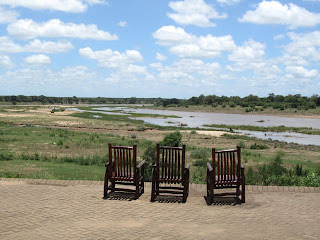 ooooh...it feels like spring is going to show up now with lots of fresh green to prove it....after the storm it is always hard to believe the storm really happened. Losing one's keys when traveling about seems like it would be quite a disaster....cold beers would taste great!

No matter where you turn it always looks gorgeous (that Mozambique place is simply heaven).
Your key story makes me remember when my old Uncle John had also lost his car key when we were out on our adventurous road to the West Coast of the US. We were in the middle of nowhere, and the keys were gone.
His solution? At that remote post office among all the other people he loudly said, Dear Lord, You must help us! Where are my car keys? And while he prayed, his eyes fell into his trousers-turn-ups, and there they were.
Where were yours?
I love your stories! They always stir something up in me.

Mermaid Gallery - oh i hate keys - waste a lot of time looking for them when they are not even lost :) you are right about the storm too - its hard to believe it was so wet when you look around now.

Geli - I shall try that next time. They were in my pocket where they were supposed to be, but they had momentarily found a tiny corner to hide in so that i thought they had fallen out. Luckily i found them before we got back to the cabin so no-one needed to know but i told them anyway.

Mermaid Gallery - oh i hate keys - waste a lot of time looking for them when they are not even lost :) you are right about the storm too - its hard to believe it was so wet when you look around now.

Geli - I shall try that next time. They were in my pocket where they were supposed to be, but they had momentarily found a tiny corner to hide in so that i thought they had fallen out. Luckily i found them before we got back to the cabin so no-one needed to know but i told them anyway.

Not everybody would have! I bet you gave them a good laugh!
But oh yes, try it next time. Uncle John did his loud praying anywhere (even at the American Embassy), and I must say, it always helped!

Good lord that bug looks big. Is it?

So glad you aren't closer to the typhoon!

Geli - yes there was some relieved laughter. i lose keys often so i must try Uncle Johns technique next time x

Reya - it was about 3-4 inches long i think; very lacy and beautiful in a subtle way. havent managed to ID it yet though. So far the second cyclone has stayed off shore thank goodness.

ah but it must be good for the wildlife, all that rain? your adventures always inspire daydreams here. thank you val. only 3 more months...
and the view from letaba, bliss.
xxoo

I hope you don’t get the cyclone or heavy rains. I’d love to sit in one of the rocking chairs in your last photo.

no matter what the subject, i always feel a sense of peace when i read your posts!
cold beer sounds good in any country haha
~laura xx

Lori - those 3 months will fly! you must be so excited about your trip?x

Vagabonde - those chairs have about the best view i think.

Laura - ah thanks for that.

Now that was a relaxing hour or so spent on your blog, Val. Haven't been here for some time so lots of news to catch up to.
Thanks for the updates on the rain and rhinos and Mozambique.
It's amazing how the scenery can change after a good thunderstorm.
Lovely pictures all round. I hope and prey for a solution to the stupidity of rhino poaching.
Kind regards to you and Keith.

Charl - thanks for spending time with us on The Roof! i thought you had been quiet :)

i could feel the mud and smell the guano drying in the sun......great read. what is that fantastic insect?

Amanda - the nearest i could find is a kind of bark katydid? love to know if anyone can ID it. they are usually nocturnal and it is not very well camouflaged here! x