Rhinos - in praise of 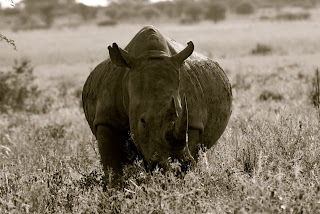 I can't tell you where or when these pictures were taken because rhinos as a species have never been more at risk of extinction. We have lost two subspecies already in the past year.

For these gentle jurassic giants, it seems the clock is ticking. When we are lucky enough to see rhino in their natural habitat it is almost with a sense of anticipated loss. How much time will they have? will their bouncy inquisitive young even have a life in our lifetime?

So here are just a few pictures showing rhino doing what they do best - which is eating lots of grass or leaves, and rubbing shoulders with each other. They also love to lie around in sticky mud and leave calling cards at steaming middens. 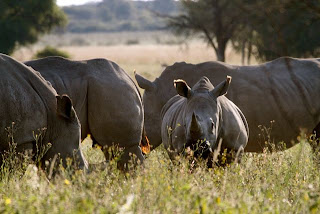 They are frighteningly easy to kill.  They are creatures of habit and territory.
They stand still, like well behaved targets for poachers or hunters bullets, while they try to work out if you are a threat or not. 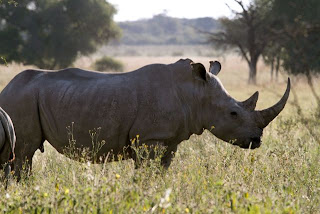 We all know where the markets are for rhino horn and ivory.

So why can the carnage not be controlled? 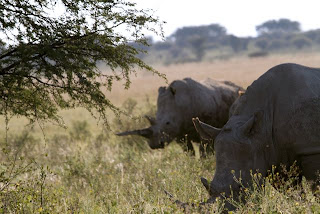 Rhino horn is made from the same stuff as human hair and toenails.

The needy could use their own. 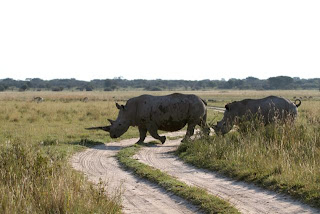 They can move suprisingly fast when they get going. 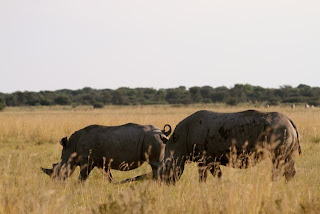 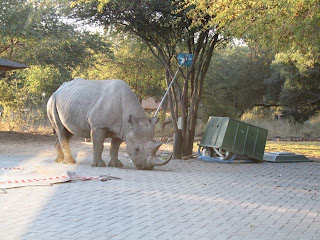 a
a young black rhino visiting the pool for a drink 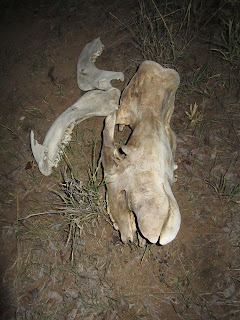 The remains of a young white rhino who died with his back foot caught in a poachers cable snare.  It must have taken a few days before he fell headfirst into a donga (ditch) and probably died of stress and thirst.    This is the skull and jawbones - all thats left to be seen, after human and wildlife scavengers have taken what they want.

I love them.
And I like overall your first picture.
(and I wish not to write what I would do to poachers...)

More than ever we are driven by the desire for personal growth, we claim our own place we know we deserve. We want the things better and more expensive than ever, because we know we deserve. We are assertive and let others know what our principles are. We are angry because the fuel we need for our cars, prices go up, angry that others pollute your world. We hate that forests are being cleared for food that is sprayed with peticide like a delicious perfume, but hate even more that organic vegetables in the store are so expensive. We're sorry that others are recognized for their talent and feel we are entitled to a portion of the proceeds while forgetting our own talents.

One day, one day no one knows when we will see that we've grown, grown is our ego, our greed. While we as humans have become worse, just like the one we have always looked at with distaste.

Hopefully this day of repent will come before the day that the ones that served our earth as ever before will have left us for good, they who are driven in pollinating the flower that wil become our food, fertilize our soil, while gracefully grazing on ever smaller becomming plains, as part of that beautifull painting called Mother Earth. That mother where the great painter once gave us a humble place, That painting we know of we can paint better without even being able to see real beauty.

That day will soon have to come ..

Val need with people like you, driven by the beauty of your habitat, using their talent to make that day come sooner.

Sorry for the bad spelling but sometimes I get so angry of this sh*t that I forget about it. (hope you still can understand the story)

I love all the pictures. Makes me sad. May the rhinos prevail!

Andrea - arent they just an incredible shape apart from anything else?

Joost - i hear you for sure; this world seems so crazy at times and so many seem to have lost touch with everything except virtual reality; maybe the publicity the rhino crisis is generating will help to lead us all back? thanks for your passion and concern - you can and do make a difference x

Reya - yeah it is sad, and I hope they do too! They carry the flag for many less glamorous creatures too. At least promoting awareness is something we can do.

Thanks for the photos. They are beautiful animals. I do hope we will be able to turn the tide on their poaching.

swallow..........this is really hard to read. but so important that you share this, val. it is heartsickening to think that these regal creatures are being wiped out......such mindless, pointless violence.

lgs - yes I do hope so too. The rhinos are high profile but actually there are so many smaller species in trouble too. its good to raise awareness.

Amanda - rhinos belong to us all; it will be a tragedy - and nothing to be proud of - if we lose them on our watch. I keep saying this but it seems to me the more we care and try to protect something, the more it disappears.

Its crazy that we all know where the markets are for illegal ivory and rhino horn, but it remains unstoppable.

lgs - yes I do hope so too. The rhinos are high profile but actually there are so many smaller species in trouble too. its good to raise awareness.

Amanda - rhinos belong to us all; it will be a tragedy - and nothing to be proud of - if we lose them on our watch. I keep saying this but it seems to me the more we care and try to protect something, the more it disappears.

Its crazy that we all know where the markets are for illegal ivory and rhino horn, but it remains unstoppable.

i can feel the saddness in your heart in this post, and i empathize.
i got a little stuffed guy for a christmas present from my daughter and i named him Rhino. i will hug him a little extra
~laura x

Rhinos are are very dangerous but also very polite animals.
we just killed them only for his precious horn.
we should change our behavior with them.

Have you visited www.stoprhinopoaching.com ? Interesting site.

laura - thanks give him a hug from me too.

World Famous - definitely we should change our behaviour to Rhinos!! to stop killing them for their horns would be a fabulous beginning. its not medicine anyhow.

Jenny Woolf - it is a good website. there are so many people doing good work trying to conserve species, and protect rhinos. We know where the markets are but somehow we just cant contain the killing.