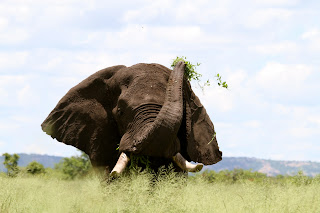 It was a hot summer day. The kind that makes you want to run for shade.  Sunlight shimmered off emerald green grass. Distant hills in razor sharp detail etched a line between the endless green and the deep blue skies where lumpy white clouds massed and gathered.  A big bull elephant moved slowly through the lush grasses pulling up bunches of green as he walked, and waving them high before cramming them into his leathery mouth. 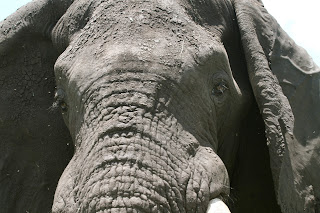 His one ear hung tattered and torn, flapping loosely in time to the rhythmic waving of his other perfect ear. It told of battles won and lost along the ancient pathways of the elephant fields.  He moved steadily straight towards us filling my lens with his giant shape.  He was caked with mud, clods of which sat in a ridge down his spine, andclung to the deep wrinkles of his skin- like a mountain of earth come to life.  Liquid golden eyes looked down at me, focussing sharply - waiting for me to move out his way. He drew himself up to enormous height. My camera pointed directly up now, and we stared - golden eye to electronic eye.  There was a moment hung in time.  Steadily the earth mountain creature swung his great head away and he moved off into the track behind us continuing on his way.  I breathed deeply. Wow. 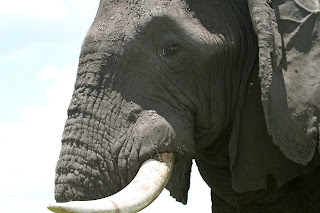 All across the curve of the earth within our lowly view, elephant bulls fed, grazed, slept, drank from pools, splashed in mud wallows;  they greeted long lost pals, and moved away ahead of old adversaries.  Summer is their time. Elephants prefer grass, and for now, there is an over abundance of sweet long waving grasses.  The tensions of late winter months are gone.

We had gone to this elephant country to escape from our world for a day - to clear the clutter in our minds and feed our souls on the natural world. 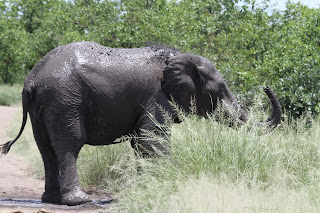 Further down the road another bull elephant stood splashing mud over his body from a pool next to the road. He cared little about us, but continued splashing each and every part of his body, swooshing his trunk over his face and eyes.  Another bull arrived. They were clearly pals and greeted each other with gentle trunk waving, inserting the tip of the trunk into each others mouths.  The second bull began the same procedure. As they parted ways again - one to the shade, the other on another path - there was an interlude of parting gestures - gentle trunk caressing of ivory.

I love to watch elephants walking along a well trodden path.  The rhythm of their gait, and ears flapping like sails catching the wind, remind me of giant galleons on a course at sea. 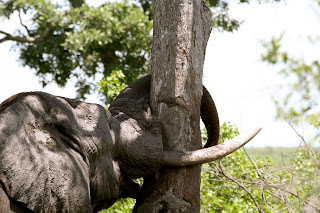 Further on, another elephant in the shade used the rough bark of a tall acacia tree to scratch every part of his mud caked body.  He manouvered around slowly, enjoying the feeling, and leaving a fresh coat of mud on the trunk of the tree. He had all the time in the world - there was no need to rush.
Posted by Val at 5:19 PM

Fabulous post Val. you make me want to jump in Mum's tiny car and head off to Kruger!

Oh God, you are so lucky. I`d love to spend a long, lazy day there with you, doing nothing but watch... What a wonderful post, Val!

"He looked like a mountain of earth come to life."

your writing just floors me. your descriptions take me there - and i wish i could be there - seeing these magnificent creatures up close.

thank you for sharing your stories, val. you should write a book. really.

The words, the photos -(especially that first one) are just wonderful. My three year old son is fascinated by the, his first stuffed animal he became fond of (the others are long gone and replaced by other elephants) is still precious. He can watch movies of them for hours - over and over again. He also loves giraffes and monkeys. He adored this post. I appreciate the words - you bring it all to life.

What a beautiful description of your day. I can very much feel the peak moment of looking eye-to-golden-eye with that elephant:fantastic.

How wonderful! A rhapsody of incredible creatures just being. How lucky you are to breathe the same air!

As always your descriptions are so good I live the story. Gret photos. Diane

i want to be there too. i'm so glad you had the day val.

Rob - do it if you can eh. when will you get another chance? how tiny is the car??

Geli - ja we had to escape the heat and clear our heads; those elephants were the best tonic in the world x

Amanda - wow thanks! one day maybe..?

Margaret - thats amazing. your 3rd old and I share some common loves :) do you read the blogs to him - or is it just the pictures? seems like his destiny will include elephants somehow. i hope he lives his dreams.

Kerry - thanks - yes it was an awesome moment in time :)

Friko - thats so kind of you. thanks.

Diane - thanks for being here


it has been wonderful to share this slice of soul food with you all; its so great to know you are out there somewhere. I hope you all find some soul food of your own about the place.

As always, this is so beautiful and evocative. So elephants have golden eyes? I didn't know that.

I've learned so much about these incredibly complicated beings from you, Janelle, and Tam.

As always, I am grateful!

wow this is awesome. what a great post!!
~laura

I so love the idea of elephants having the time to slowly meander on their way. beautifully written and fantastic photos.

Reya - elephants have amazingly beautiful eyes, with whites around them. They are like a window into forever.

Pooch - thank you. Elephants are good soul food - just to be near them when they are peacefully feeding and travelling is deeply calming. Of course, when they chase you its not so calming though hehe

Fire Byrd- there's a lesson there hey? Its so good to see them in an evironment where they can go about their business without man made plans and strategies.

thanks so much for stopping by and leaving your messages xxxV

they CHASE you ?? thats crazy
~laura

Laura - oh yes they can, and they trumpet loudly to shiver your timbers. hehe

wow thats amazing. it would be scary and exhilarating at the same time. it would be enough to command respect i imagine
cheers
~laura

"the corn was high as an elephant's eye" has a deeper perspective now. Wonder what was going on in his head as he pondered you. I can hear the buzz of insects in the air as I read that post.....