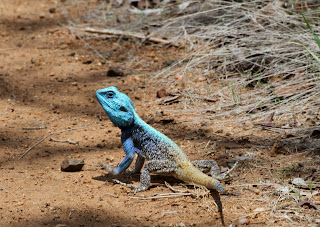 Spiders and snakes, tortoises, scorpions hunting under the lights, preying mantises
that defy the imagination, big fluttery moths, and small scratchy scurrying beetles.  Al the small folks are out now released by the flush of first proper rains.  Driving through the mopane forests we pass through zones of screaming cicadas. Golden brown impalas  flit across the track followed closely by their newborn fawns – tiny scraps of life - and disappear just as quickly behind the curtain of dayglo green leaves.  Summer is here in all her lush green glory.

We have been traveling, between Botswana and Mozambique, in the race to be everywhere at once before the big rains close down the more remote areas for the season. Our last trip was into the LimpopoTransfrontier Park in mozambique where the Shingwedzi River crosses in from Kruger Park, South Africa. It is wild wild country with horizons so wide you can see the curve of the earth for sure! 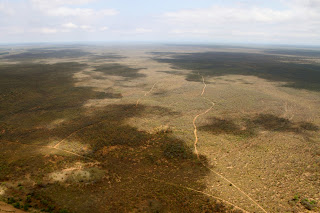 a fork in the road 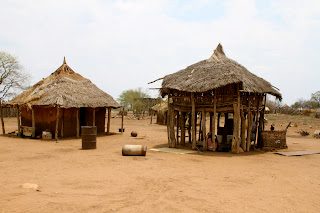 summer heat hammers down on a quiet village 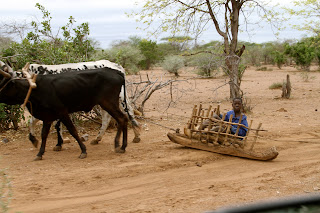 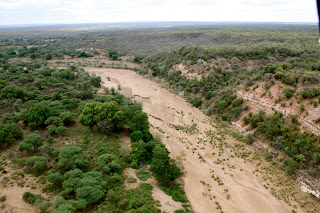 a river bed that waits for the rain 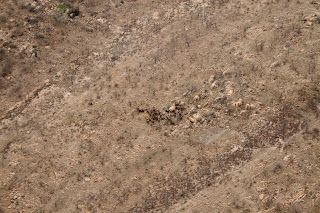 elephants look so tiny from up here 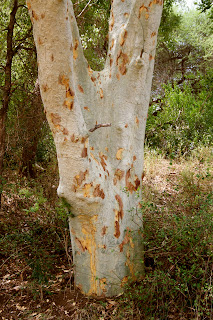 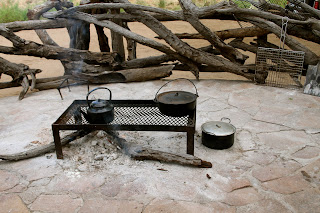 our camp fire on the edge of the river

The edging ariund campfire site look like it could be part of skeleton of Dhow Jones .....

Hahaha - wish I'd been airborne with you guys

The turquoise headed iguana is spectacular! He must have his head in the clouds to get that color! That is a camping trip that I would love to tag along on. In Mexico they call the fever tree the tourist tree because of it's peeling skin. The traditional village looks like a very tough life...yet I am glad that such villages still exist in our world. It all looks like it will get very hot! Such a wonder that we can see it through your eyes.....

As the last commenter said, a wonder we can see through your eyes!

Will you tell us why you must reach all these parts before the rains come and close them off?

I cannot imagine what your life is like, each little glimpse you grant me through this blog is a revelation.

What a sleigh ride. Thanks for sharing all of the pictures.

A bunch of terms that I first heard when my teacher read me "The Elephant's Child" by R. Kipling. All there, for real! And thanks for the reason for the fever tree name.

Great pics all but I found the riverside campsite very interesting. Looks like a very nice spot indeed.

i can 'see' the curvature of the earth in that foro....i love the way you give life to this raw, honest landscape with your words -- always a pleasure to experience

and the blue in that lizard -- it is incredibly beautiful but i wonder if it helps the creature in some camouflage way?

As ever beautifully written and illustrated with wonderful photos.
That iguana ( or is it a lizard?) is stunning!
Hope the rains are suffiecent for the needs of all.

Brilliant! lovely spending time with you, like Geli would say, 'in your pocket'. you are a perfect guide and for me these posts are always over too soon. I'll go back and read again. Have fun you too!

Yes, I am always in your pocket! You must hear me shouting once in a while - LOOOOOK! Oh man, did you see THAT? Haha, your pocket is dancing and shaking!

Great photo journey (love the sleigh!) and that camp fire.. great to catch up with a coffee this am :)

You take such wonderful trips . I am pleased your take us along – I enlarged your photos and I can feel the immensity of it all. Great post!

I still get a kick about hearing the opposite seasons! How loveley for you to have such lush surroundings. Wonderful looking trip. We have lots of sleds going here to but they are on cold wet stuff!

You seem to be on a wonderful trip.

I m so excited. I m off to Serengeti for the holiday season, hope to come back with some good wildlife experiences...Thomas

hey Janet - i hope dhpw jones doesnt look quite so skeletal yet!! hehe

susan - that is such a lovely thought about the agama dipping his head in the blue sky. love it. funny about the tourist tree too!

Friko - its what we do, and love to do i guess. The rains are here now so i suppose we cannot be so interpid for a while again...

Leenie - hello and thanks for visiting!

lgsquirrel - it was a perfect camp site.

hey Janet - i hope dhpw jones doesnt look quite so skeletal yet!! hehe

susan - that is such a lovely thought about the agama dipping his head in the blue sky. love it. funny about the tourist tree too!

Friko - its what we do, and love to do i guess. The rains are here now so i suppose we cannot be so interpid for a while again...

Leenie - hello and thanks for visiting!

lgsquirrel - it was a perfect camp site.

hi Amanda - well the blue is a breeding colour - we only see them at this time of year - usually their camo is perfect against the bark of the trees.

Fire Byrd - the rains started properly this week and seem o be fairly widespread. I too hope everyone gets their share. Its such a critical time.

Lori Ann - ah thanks for coming along with me - indeed i do carry the blogosphere in my pcket when i am travelling, and even when i am not!

Karen - was so good to see you both. btw found some sugar packets with messages on them again. perhaps they will come round again? x

Vagabonde - wow thank you - i am glad you could get the feel of the immensity of that landscape. It is so good for the soul to know such places exist.

Lorac - yes it always fascinates me too - how can it be so different when our world seems so small sometimes.? I am thinking of you all in the snow!

Thomas and Shiply - hello and thanks for the visit. Wow - Serengetti is so amazing; you will have an awesome trip. travel safe and have a fab holiday.

So sorry for the delayed response to your lovely comments. you know i love to receive them. Between travelling and failing internet connections, i have been a poor communicator, but hopefully that will improve now. Thanks for visiting my blog! xxxV