once in a blue moon

I stumbled accross this story i wrote in early January this year - and never posted to The Roof for some reason. Am I allowed to post it now?  was that a yes? 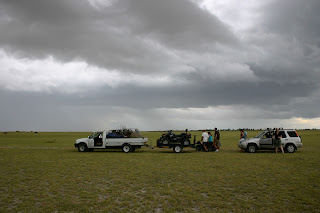 We arranged to meet friends in Gweta to spend the night on Makgadikgadi pans.  This year a full moon and a blue moon marked the end of the old year and beginning of a new decade. Makgadikgadi seemed an obvious choice of venue. Wide salt pans  on the edge of the central Kalahari desert.  So wide you can see the curve of the earth. Blistering hot and dancing with mirages on a clear summer day; biting cold and a theater of dust devils in winter months – it is a vast empty space that sets the stage of atmospheric dramas of every kind.
We spent the first night in Nata, a small town on the main northern route through Botswana.  At Nata Lodge we learned that Ben, an old friend, had passed away the day after Christmas.  He had worked at the Lodge for 25 years – since it started; and his ever smiling face and soft voice greeted us each time we arrived.  We have spent many an evening with Ben there over the years. How were we to know that the last time was truly the last time?  His funeral was to be on 2nd January – we would be there.
The following morning we took a slow cruise along the Maun road to Gweta to meet our pals. This strip of tar, made famous by many a safari tale, cuts across the northern edge of the great salt pans. We slow down for donkeys, cows and villages, and stop to watch a herd of kalanga horses drinking from a rainwater pan – manes and tales blowing in the wind.
Gweta lodge is in the middle of the village, surrounded by mud and thatch homesteads, general trading stores and lively drinking spots. Donkey carts have right of way here. We pull into the gates of the lodge, park in the shade and make our way to the thatched lapa.
Cool and shady – a retreat from the sweltering heat. The lapa in the heart of the lodge, in the heart of the village, is like a warren in the tallest termite mound.  The pool sparkles and chugs – bodies bob in bright water – foreign visitors lie roasting in the midday heat. We meet up with some pals, and catch up on lost time while waiting for the rest to arrive from Maun.
The sky is full of large ballooning cumulus clouds. 'so you are planning to camp on the pans tonght?' yip.  Well if you change your minds you can always stay here with us.' There is a big party planned for new years, and the mood is convivial.  The mercury continues to climb to new heights. Thunder crumps in the giant ballooning clouds creating atmospheric tension.  It breaks – rain falls, chasing the sunbathers into the lapa. But the shower is short and sweet filling the air with  that heady ozone smell.
We had planned moonlight flights over the pans. Our pilot is sky watching. He blinks often and holds back on judgement. It looks like we are in for rain. Even I can see that. The others arrive – we decide to stay with our camping plan. 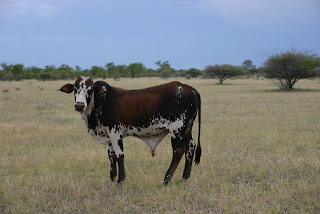 An hours drive over rolling spikey grasslands past sleepy cattle, and thorn scrub. The plains open out against a dark purple curtain of rain lit by flashes of lightening. The wind is blowing. The pans are too wet to drive on. Pools of water on the surface mean we don't even have to try. It looks inoccuous enough, and could be tempting if we didn't know just how treacherous that surface could be. Like sirens of the salt pans, a soft voice questions 'how bad could it be? It looks ok? Give it a try…'  at your peril – this crusty clay sediment is all that's left of an ancient lake bed. You can be driving along happily and then suddenly it will give way and suck up your entire vehicle up to the chassis. It is corrosive and cloying and there are no trees in site to attach a winch to even if you have one.
So after a cursory check along the edge – we abandon the idea of crossing the pans to camp at the two islands in a sea of salt. The purple rain cloud flashes lightening in the south.  We head back to the palm trees to set up camp. Heavy clouds roam the skies speeding across to the purple party.  We stop under a spreading camel thorn tree, make a fire, put up tents. A salmon pink splash in the west is the sunset banner in the sky; in the east a full moon rises through the palm trees, between the clouds heralded by bolts of electricity on either side. It is a blue moon. An awesome yellow moon. A fanfare for a departing year.
Billy makes a fire with much puffing and fanning of flames – puffing Billy. We cook potatoes in the coals, and beef fillet on the braai.  We stay up late – young people take the quad bikes for moonlit rides. It doesn't rain on us .  At midnight we open champagne, hug each other and wish happy new year. The moon spreads its silver light around us. 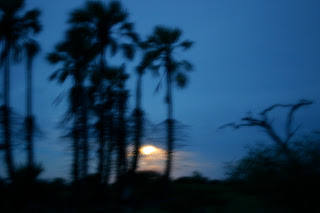 Riveting Val. I always have to push my jaw to the closed position after reading your descriptions of your excursions. I think I covet your life - it seems so exotic and adventurous.

What a perfect way to welcome in a new year! Thanks for not forgetting to post this.

At first I thought I would have preferred the shelter of the lodge, but as you kept on telling I see why you chose the palm trees in the open land. Oh God, what a picture! Like Bonnie, I am glad you did not forget to post this!
Did you attend the funeral? It is hard to part with friends, but I think a shared ceremony helps.
Now I wish you a safe trip to Mozambique! May that school house come to life!!

Val, with stories like that, you are always allowed to post them no matter how delayed. That was wonderfully written - you ought to be published. Precious few live experiences like you and fewer still are able to enthrall readers the way you do!

I always love to come to your blog and read of your adventures and explorations. I would love to be there with you on your journeys. But, I will settle for just reading all about your fascinating journeys.

What fabulous story telling of an adventure.It's so far away from my life that it doesn't seem possible to be part of the same world that has elephants and lions in.And my coming here and reading your wonderful words allows to to spend a moment in just such a place.
Thank you
xx

Bonnie - thanks for being first up again! and for your kind words :-)

Geli - yes we went to Bens funeral - it was beautiful and sad. Lots of people were there, and the singing was a wave of healing sound around the distraught family. Unforgettable. Like Ben.

Fire Byrd - the blogosphere constantly amazes me with stories from such diverse places I too find it hard to imagine we are all on the same planet!!

Thank you everyone for your lovely comments. xxxV

Val, Oh my gosh. I agree with everyone here, that was just amazing. Your descriptions of everything from the sunset to the rain makes me feel it.

And long for it.

That last photo makes me wonder if I was dreaming all along, you could write 300 words just for that image alone. You are truly a painter of words. And I am so glad to know you.

p.s. tomorrow Chuck is going out to the "Island of the Blue Dolphins" to catch the wildflower bloom.

That was nice, escaping into your world, Val. I love your writing.

How absolutely fabulous!! Oh to be out there in the middle of nowhere with some good friends (or on your own. . .)

You are an absolutely amazing writer. You brought this story to life and I hung on every word.

What a wonderful celebration.

So sorry I've not visited in awhile. Your photos and writing are as stunning as ever. I hope you are doing well.

As far as your posts, I'm up for them at anytime.

Hi Val - what a great post all about the Pans, one of my favourite places on earth - so glad that you found it!! I also enjoyed the Chobe one earlier, of course - though for some reason I just could NOT leave a comment on it!

What an interesting post – just a joy to read it as your prose is so evocative. I have always loved Africa and even though I have been there a dozen times, it is certainly not enough. At work we had trainees from Chad for a while, then from Gabon. I remember talking with them for hours, then I was lucky to go to Gabon. I started a collection of books on Africa – old and antiquarian books. I must have over 400 now, maybe more. I just finished reading one written in the early 60s by an Englishman who started, he says, the first TV series in England on wild animals of Africa. The book was good, but your posts are better, and better written. Thank you for coming to my blog, Val, and writing a comment. It is so nice to know that blogging friends come to visit, and I appreciate it.

dear bloggy pals - thanks so much for your wonderful comments - and encouraging words! it was an unforgettable New Year Blue Moon and a magical place to spend that time - especially magical as it didnt rain on us :)
blog on everyone and enjoy!! xxxV