The end of the water 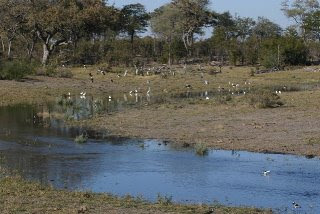 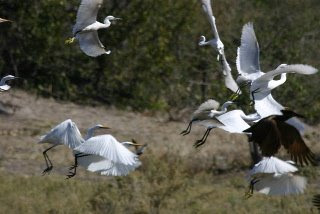 The temperature dropped considerably around 4 am this morning. Lions
started calling. We interrupted sleep to try and home in on their
direction. They used the floodwaters like a giant lion phone -
carrying their calls far into the dark night.

First light and coffee in hand, we headed out to look for them. We
found tracks going this way and that. We followed the freshest tracks.
Large pug marks laid precisely over the round wrinkly imprint of
elephant tracks . Scanning the flood plains on either side, we
finally lost the tracks when they disappeared into the tall yellow
grasses. Ghost lions.

Pressing on into the bright morning, we drove towards the Spillway. On
the way we speculated on whether the Okavango water would eventually
push through to meet the Kwando water of Selinda. Last time we looked
there were two kilometers to go. If it meets there will be a party in
celebration. A fire will be lit between the two waterbodies- to be
doused as the flood progresses. In a desert country this is such big
news that the press will also be invited.

But today we have the Spillway to ourselves. Bright blue water in a
sparkling channel between giant leadwood trees, rain trees resplendent
in hanging seed pods, ant hills and countless game paths leading into
the forest. Along the edge of the water a bright green ribbon of
fresh growth, then endless sand.

We are skeptical but when we see how far the water has progressed
since our last visit five days ago, we change our minds - maybe the
Spillway could flow again after all. It is 27 years since these two
bodies of water last connected. We have lived through the drying up
years. To see it turning full cycle and becoming a water-world once
more is indeed a wondrous sight.

Flocks of birds mark the waters progress. Marabou storks, saddle-
billed storks, herons, egrets, stilts, glossy starlings, fish eagles,
kingfishers, hamerkops, plovers and a pelican carefully eye the waters
progress. It starts to fill a pool of water, running in rapids over
the drop between ground levels. As the water levels rise the birds
move in - herons and egrets line the edge of the pool, poised to
strike, they soon start catching small fish. Activity levels rise
and the pelican paddles in. He scoops the water with his bill like a
catch net. As he catches something he closes the bill and lets the
water drain out before tipping his head back to swallow his prey.

The activity is riveting and we watch spellbound noting all the
different fishing techniques and levels of niche requirements. The
marabou storks arrive walking in a line like constables at a crime
scene searching for clues. The pelican maintains his high speed
paddling and scooping routine which is proving highly successful. The
bright white egrets and herons keep their poise and choose their time
to strike.

Baboons arrive on the scene. The birds take off in a vast white
whirling flock.
Baboons stop to pick some small herbs, bending to drink at the waters
edge. One by one they raise the courage to cross the stream at the
narrow rapids. The brave ones walk slowly through tails held high.
The less brave jump high into the air. Nobody waits for anybody else.
The troop moves on into the tree line. The last ones to cross have
been trying to act unconcerned, and using displacement activity to
avoid the moment. Finally the time has come - they jump high. More
birds flee. Once across they burn off adrenalin by running full speed
to the forest.

Steadily the white cloud of wheeling birds returns and settles by the
pool. The pelican resumes his feast. A fish eagle calls loudly and
the water continues to edge slowly but surely up the channel bed. The
bets are on - want to play?

My bets are on YES.
Lovely words felt like I was there with you.

Val, I don`t know how you do it, but you make my eyes fill with tears. How absolutely beautiful and enthralling!!! Those fishing techniques, who else would have described them as closely and wondrously?! I am also full of admiration at your track-reading abilities. You know which lion and elephant traces are the freshest? And you FOLLOW them? I mean, what if you were followed as well?
Please do take care!
And my bets are on YES, too ( I hope).
Be sure to take us with you when that happens!

I love reading your blog. You have a gift for capturing the magic of the wild animals and the weather and everything around you.
Thank you!

I close my eyes and can see it.Your descriptions are amazing. I do love coming to visit!

It's sounding good for a meeting!!!!
There're enough birds ahead of the water
Maybe this is full circle time
What an amazing time to be there. . . . waiting. . . .