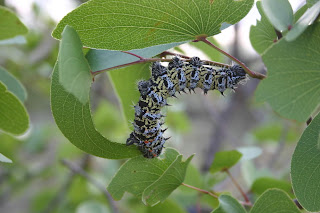 The mopane worms have started. First the leaves turned green after the rain, and the heat cranked up a notch again adding humidity to the mix. Then somebody laid little tiny white eggs on the undersides of the leaves. Stacked together in rows they are apparently very sugary, and baboons and monkeys snack on them as sweet treats.
Obviously not enough though because suddenly the trees are dripping with mopane worms as all the little eggs are hatching.

I don’t know why they call them worms because they are more like big fat colourful caterpillars, but they emerge from these tiny eggs and start eating leaves straight away. Climbing on top of each other to reach the ends of the branches. They eat so much and so fast that you can almost see them growing before your eyes – if you stood there for a while. When they reach the end of the branch they drop to the ground and start marching caterpillar style to the next tree. Within days the largest is the size of my index finger. And the trees are stripped of leaves again – naked as they were at the height of the drought. Their first attempt at summer foliage is sacrificed to the needs of this hungry horde.

Mopane worms are the larvae of the Emperor Moth – a giant velvety moth that bats against the windows in the evenings of early summer. It comes in shades of pinks and browns – old rose colours – and has two enormous false eyes on its wings. The moths live for four or five days – long enough to produce a batch of eggs. The eggs become mopane worms who feed voraciously and then burrow underground to pupate through winter.

All along the road side bakkies are now parked in the shade of the trees, and locals – mostly women – head off into the mopane forest with huge buckets to collect mopane worms. Carrying the buckets on their heads, they are draped in colourful cloth skirts and often wear rubber gloves. These worms are not easy to pick up – their holding devices would put a hyena’s jaws in the shade. Well that may be a slight exaggeration but they have little black legs and feet, and if you need to pick them off your shirt you have to really pull – and you cant squeeze at the same time because in the middle they are incredibly soft and squishy. 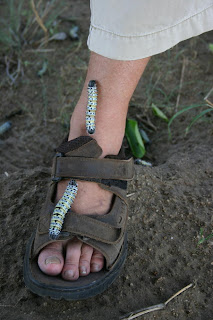 They are colourful characters, these worms. Aside from the black feet and legs, their bodies are patterned with dayglo reds, greens and blues – in varying amounts, so that each is quite individual. They are also somewhat spikey. You will find some that are predominantly red, others softly blues and greens – but all are entirely focussed on their job which is to eat every green leaf in the mopane forest.

Once a bucket full is picked, the women will gather under a shade tree, and squeeze each worm like a tube of toothpaste to remove the stomach and innards. It’s a messy business. When the bucket is full, the women return to the road and their harvest is collected and taken away to be dried or smoked. Dried mopane worms can be eaten as a snack, or later soaked and fried or put into a stew. I tried a dried one once – just a little bit – and it tasted like leaves to me, but some say they taste like honey roast chicken…… You try and let me know what you think.

Although entirely seasonal they are an important source of food, and income for many who live in the mopane belt – across southern Africa. They are low cost, and low maintenance – yet high protein. But as with so many other species in the food chain they are vulnerable to over-harvesting. 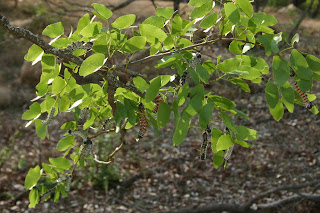 Mopane worms are fair game for the human population – they don’t belong to anyone, so collection times become more manic than christmas shoppers in the Mall. They can be seen inching their wormy way across the sizzling tar road, and where the crossing places are busiest – this is where the trucks and bakkies stop to start their day.

I googled the worms for your sake and was impressed to find they have their own website http://www.mopane.org/ which has a lot of info on the local trade – and there are even some recipes around…..
Posted by Val at 6:39 PM

Ah yes, the good ol' Mopane worm - I tried some once - sauteed lightly in garlic butter - a bit too crunchy for my taste... Still, at least I can say I've tried them. I seem to recall I posted a recipe for Mopane worms on my old blog! ;-)
So nice to know more about them and see them still "alive"!

As far as worms go they are lovely, although I can't imagine eating one! They look too spiky for my taste -- I suspect that I'd have a texture problem with them!

You say they are an Emperor Moth species? On the farm we used to have Gum (eucalyptus) Emperor Moths and their caterpillars. The caterpillars were bright pale green with colourful tufts of hairs, and we sometimes got so many we pulled them off or the young gums would have been held back. The cocoon was dark brown and hard, and the moth very similar to the Mopane moth. The kids used to take them to school.

Interesting post Val, but I'm with you on the "you taste and tell me" option! I tried deep fried Flying Ants many years ago and that's about as much sampling of the insect world with which I can cope.

Wow! How exotic. How freaky that their little feet hold tight (though I suppose they would need that function so they don't fall from the trees.

wow and WOW and W.o.w. As always, thank you. And happy summer!

I was scolded heavily last week by my homesick Zambian friend who lives here in Arusha for not bringing her back some mopane worms when I went to Zambia. Ah well.

Haven't tried one yet. Can't think why I'd want to. Put off mainy by the thought of the oozy stuff that's squished out of them. What do the women do with that stuff? Do they just leave it for other carnivirous insects, reptiles, birds and things?

Hi everyone - no I cant say I have much faith in the 'tastes like honey roasted chicken' but you never know.
Ab Van - theres a bunch of recipes on the net..
Adrianne - yes the spikes are a little off putting
Katherine - must be the same family then? these are Gonimbrasia Belina (sic Google) - yours sound amazing too.
Rob - well done on the flying ants - meant to taste like peanut butter?
Reya - yes that holding tight thing is a bit freaky and they do not LOOK appetising.. but there you go - nor do snails in my book!
Miranda - must I send you some?
xxV

Janet - yes i think the green stuff is tossed..
x

love the photos! Yes, they are quite beautiful creatures and I always feel so sorry for the ones that get squashed on the tar roads, especially when there are so many on the really busy roads... it seems such a waste, as somebody could've rather been eating them!

As for the taste.. well, I have done my duty there and my verdict is also that they taste like nothing but dry crushed up leaves! It was a bit of a mental effort to eat it, I have to say.

I have now relegated them to the prawn category, will eat one if forced, or if starving (so as not to sound like an ungrateful fussy person!!)

Oh,ugh,blech,yuck, i did try one,although i didn't know anything about the squishing out part,i will try most anything once,but if i had known beforehand about the poor worms insides and the squishing((shiver))i would have had to pass. A most interesting post.Thank you Val.
xx

Fascinating post and thank you so much for the picture. Gave clairity to the picture I'd formed in my mind and also scale.

Eating them? Maybe, and that's a strong maybe, if they were dipped in chocolate!